They are the future of programming. You’re hearing it here first. 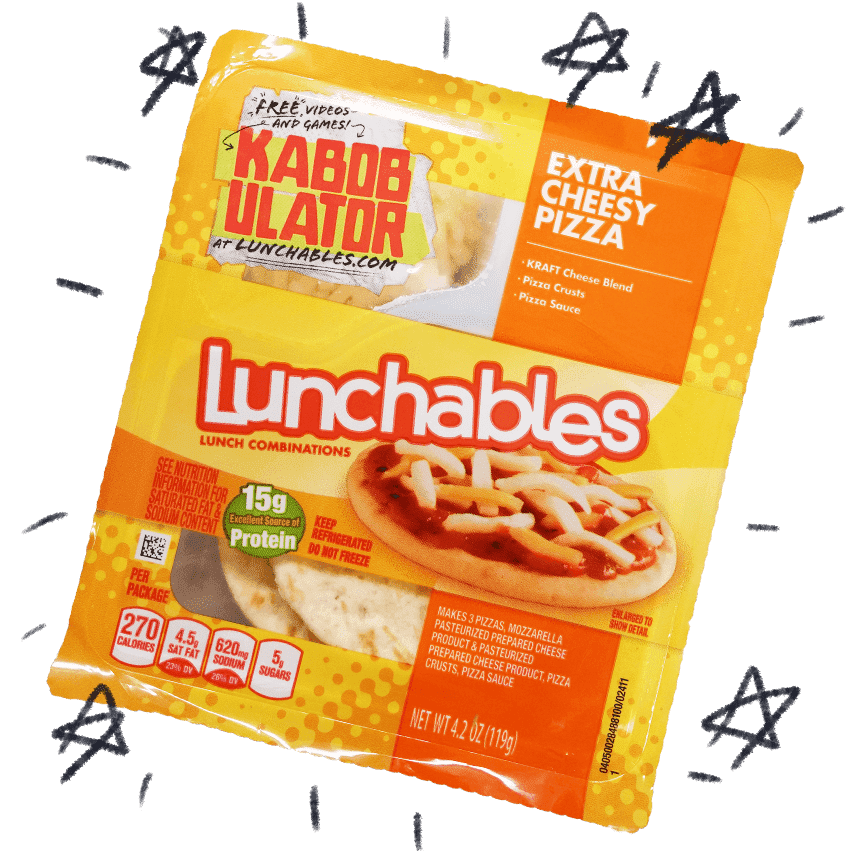 Creating software is hard. It’s par for the course to spend hours, days, or even longer attempting to do something you can describe in a sentence.

Is that just how it is?

There’s truth in that; we have come very far from coding on punched tape. And yet I believe there is still orders of magnitude more accidental complexity than necessary. Even with modern abstractions it can take months to create something as simple as a CRUD mobile app.

Could we just do:

Or if you want to make a game:

To find out I’m going to propose we get a little hungry and talk some math. Just trust me on this one and perhaps grab a Lunchable!

An Associative Lunch is the Best Lunch

I have a confession.

At least 80% of the code I write is glue code — the code which simply integrates systems and third-party libraries together. Very little is original thought. I’m a fraud. But Mom, you said I am special!

And I wager I’m not alone on this. More work will be spent composing the work of others as we work at higher abstractions. This is good! But it does mean creep of accidental complexity in the quest to avoid essential complexity.

Let’s try to conquer this creep.

I’ve been getting deeper into the ML family of languages for a while and recently read through Bartosz Milewski’s “Category Theory for Programmers”. They both made me really appreciate some of the mathematical models behind how we code.

And right at the start is the semigroup — the definition of associative composition. It’s formally defined to be a set of elements, S, and an operation, ⋅, where the following holds:

I had never heard of this before getting into functional programming. It’s a little strange that such a simple pattern isn’t part of the common programming vernacular!

Look Over There - a Semigroup!

Despite that, semigroups find themselves accidentally forming in code all the time. It’s a pattern that just makes sense.

The Salt and Pepper of Semigroups

As a human you expect basic semigroups like paint mixing, addition, and set union to work. An example of set union in everyday life is regretting things:

It doesn’t matter in which order you regret things together — you’ll always regret everything in the end. Yay!

And as a coder, there are some types of data you expect to merge together consistently. Some examples are user permissions, configurations, and pure functions through composition. Here’s some configs getting merged:

Those are great, but let’s get fancier. Here are some higher-level constructs you’ll find around in modern code. I’ve been doing a lot of UI programming lately so that’ll be the theme.

UNIX is famous for the philosophy of “do one thing and do it well”. The best example of this is the standard library of text processing commands!

We could have aliased any amount of adjacent commands in the last example and it still would have worked. This follows as functions form a semigroup under composition. UNIX commands are really just effectful functions which take text as input and give it out as output.

Therefore, in theory, any UNIX command can compose with any other one. In practice, there are many commands which assume a certain text structure.

React has taken the web app programming by storm. Many quote the virtual DOM as it’s special sauce, but I disagree. It’s special flavor is declarative programming. It’s so simple I can describe the essence of the entire API as two functions:

That’s it. The power comes from virtual HTML and components being data themselves.

Every component is a pure function, which means we can use function composition without worry. And then to construct an entire UI we simply compose all components together underneath a root component!

Let’s check it out. Composition takes one of two forms in React’s templating language, JSX:

You never see code like this; wrapping and nesting is just implicit in the JSX you write. However these two functions are the essential isolation of how you compose together components to create entire UIs.

And guess what? React components are a semigroup with either one of these functions. Ah, they strike again!

GraphQL is another Facebook technology which has taken the UI programming world by storm. It’s a query language designed to be the data parallel to React’s visual logic.

For the skeptics out reading: yes, there are more complicated examples. Have no fear though, as top-level composition is always permitted. GraphQL is designed this way to permit reducing disjoint queries into a single, combined one for efficiency.

Semigroups All the Way Down

At this point you may be wondering what the hooplah is about. How does this let us create Twitter apps, block punching games, or recreating the best cat in the world?

It should get interesting if we explore the implications of designing systems with semigroups in mind. Only after a complete failure would we default to more complicated patterns.

To do so we’ll have to fix one thing. Looking back at the semigroup definition:

It’s only defined for elements in S. This is a problem if we want to do something like:

What kind of set S contains all three of those parts and knows an associative binary operator to combine them?

The answer I’ll offer is this:

Constructing advanced semigroups out of simpler ones reminds me of Lunchables! Each type of Lunchable has different isolated parts which work together to create a beautiful harmony of taste, wonder, and nostalgia in your mouth.

But! Lunchables are similar to a well-architected app. You have your state, visuals, and stimuli. Stimuli affect the state which in turn is reflected in the visuals. Mmmmmmm what a recipe.

So we have a structure. Can we combine these together? In other words, can well-architected apps act as semigroups? I would have just said no if you asked me a few years ago. But, times are different. We might have the technology.

Let’s smash some apps together.

To do so, check out how we would smash each part together — the semigroups: 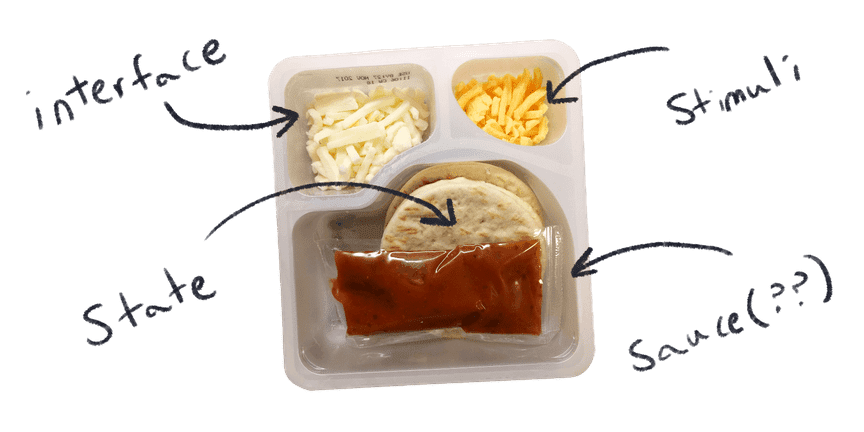 If those make up an app, then we can start to compose entire apps together! Nifty. When I get a chance I really want to experiment making a proof-of-concept of this. Perhaps by recreating the Twitter app equation out of small, self-contained parts.

I do see one problem though, and that’s in glue code. Let’s go back to the Twitter app for a second:

The semigroup needs to know how the results list relates to the Twitter API (its data source) and the search bar (an interim filtering step). The only problem is there’s no place for this information to go.

So our semigroup would no longer be a semigroup. Oh.

I haven’t really proved this, but I’m guessing you can just make the “configuration argument” a substructure in the app. This configuration part of your app defines how all the other parts link together. And if the configuration acts as a semigroup then you can still smash apps together in their entirety - configuration and all! Smashing.

Nice. I’ll update this post when I have a proof-of-concept working. For now, it’s just words.

Constructing apps like how we mix paint sounds really cool. Where else is it possible?

Just to take a peek in other areas of software:

Semigroups and additive composition surely aren’t new ideas. But I can’t shake the feeling it’s not even on the radar for most software platforms. Imperative stitching and ad-hoc configuration seems to be the norm, as if it’s accepted that’s just how software is created.

Let’s strive to be simpler. Even if it’s hard.

Evolution of API and Microservice ecosystem

How to Build an Event-Driven ASP.NET Core Microservice Architecture with RabbitMQ and Entity Framework

Kevin Sullivan
Doing new things at the intersection of technology and creativity. Because data and design deserve each other.
Multiply a string? 🤔
#computerscience #discuss
How to stay focused 🔍 as a self taught Frontend Web Developer 💻
#beginners #webdev #productivity #devjournal
3 general 🚀 Productivity 🚀 tools you should be using that you possibly haven't heard of ⁉
#productivity #webdev #discuss