Technology development has greatly increased innovation in web and mobile applications. Regardless of an organization's sector vertical or functional competence, the concept of digital transformation today affects all organizations. There are two main divisions when we consider to develop a web app: frontend and backend. Every front-end developer starts with the browser and its advantages when tackling a project. Backend developer, however, uses a database that runs on server to carry out the operations of sites. 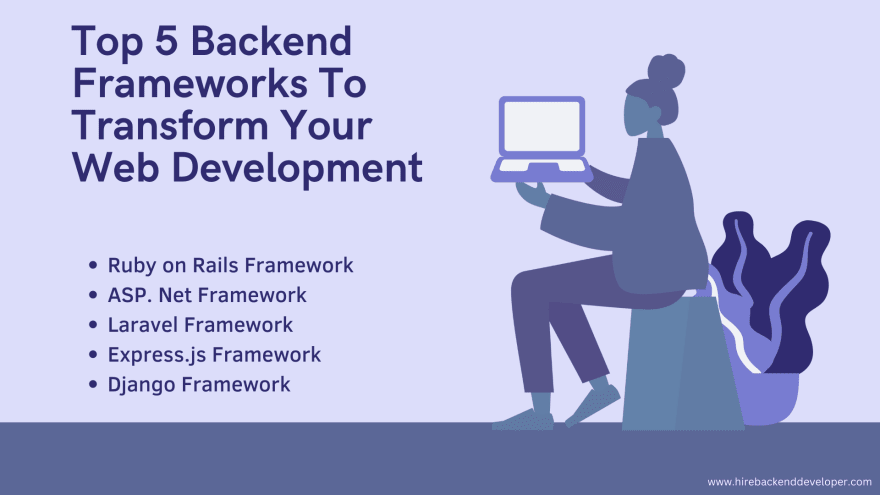 2) ASP.NET Core: It is an open-source variant of ASP.NET that was first released in 2016. It is an update to the prior ASP.NET Windows-only versions. ASP.NET Core is a well-liked web development framework that is significantly speedier than the majority of already accessible frameworks for building web apps on the.NET platform.
ASP.NET Core's salient characteristics are:

3) Laravel: It is an open-source PHP framework built on the MVC design that was first introduced in 2011 and released under the MIT license. The ideal backend technology for creating blogs, news, and e-commerce websites is Laravel. The creation of safe and cutting-edge online apps is made easier with Laravel's user-friendly interface, built-in API support, and vast libraries. Laravel is a relatively new framework that is user-friendly for beginners. It has the following features:

4) Express.js: Due to its cutting-edge features, international brands like IBM and Accenture rely on the popular Express.js framework. Express.js is quite flexible and enables REST API apps. Express, sometimes known as Express.js, is a straightforward Node.js web application framework that offers the following basic web development features:

5) Django: One of the most well-known open-source Python frameworks, Django was first released in 2005. Django is frequently referred to as the web framework for perfectionists with tight deadlines since it is built on the DRY (Don't Repeat Yourself) principle, which emphasises reusing existing code and focuses on new sections to speed up developer work. Due to its higher security, Django is frequently used to create FinTech apps, booking engines, and e-commerce systems. Some of its important features are as follows:

There are many potent frameworks for backend web development, each with essential characteristics and capabilities. Depending on your project requirements and the knowledge of a web developer on your team, you can choose the best web frameworks.

Are you still uncertain about using a backend framework?

To schedule a free consultation, contact Hire Backend Developer. You can choose the ideal framework for backend development with the aid of our team of specialists after you have validated your idea.

Four lessons I learned after working with Hangfire

Nishita Avalani
Hi, I am a tech-savvy person. I would like to share about easy hiring procedures of resources and also about trending technologies.
Autocomplete and Artificial Intelligence in your Terminal
#ai #bash #productivity #opensource
Pipenv: Why you should use it as a Python Developer
#python #webdev #django
Twitter charging for API usage starting Feb. 9th
#twitter #api #discuss

Once suspended, avalaninishita will not be able to comment or publish posts until their suspension is removed.

Once unsuspended, avalaninishita will be able to comment and publish posts again.

Once unpublished, all posts by avalaninishita will become hidden and only accessible to themselves.

If avalaninishita is not suspended, they can still re-publish their posts from their dashboard.

Once unpublished, this post will become invisible to the public and only accessible to Nishita Avalani.

Thanks for keeping DEV Community 👩‍💻👨‍💻 safe. Here is what you can do to flag avalaninishita:

Unflagging avalaninishita will restore default visibility to their posts.