As a front-end veteran, I have to point out that the increasing complexity of front-end projects nowadays makes the dependency installation slower and slower.

At Alibaba and Ant Group, Engineering Productivity is an important metric for engineers, and the speed of installation of front-end dependencies is a big negative impact factor.
​

We are the team responsible for front-end infrastructure in Ant Group. We mainly focus on building the Node.js community within the company and maintaining many open-source projects like eggjs and cnpm.
​

We started an initiative in 2021, one of its goals was to optimize the installation speed of dependencies. We managed to speed up the dependency installation by 3 times.
​

In this article, we'd like to share with you the ideas and results of 'tnpm rapid mode'.

Thank @sodatea, @nonamesheep, @Sikang Bian(RichSFO), @geekdada so much for the translation of this article, the original article was written by @atian25 and published on Zhihu.

Why is npm soooo slow? 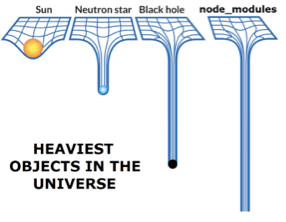 In the modern front-end ecosystem, the number of total modules has been exploding and the dependency graphs are becoming increasingly complex.

The front-end module system prefers small and well-crafted modules. While this brought unprecedented prosperity to the community, it also resulted in complex dependencies which directly led to slower installation. There are trade-offs to be made.

Whether the ecological status quo is correct or not is way beyond the scope of our discussion today, so let's focus on how to improve installation speed for the time being.
​

The dependencies installation process for an application is briefly illustrated as above, with the key operations including:

But if we install the dependencies in a nested way following npm@2's implementation, we'll end up installing as many as 3626 dependency packages. There are more than 2000 redundant dependencies. And the actual disk footprint is 523MB with 60257 files.

npm@3 first came up with an optimization idea to solve the problem of duplicated dependencies + unnecessarily deep hierarchies: the flattening dependency capability, where all child dependencies are slapped flat under node_modules in the root directory.

However, this optimization ended up introducing new problems:

Given so many side effects of the 'flattening dependencies', pnpm proposed an alternative solution, by means of symbolic + hard links.
​

This approach works great because:

Similarly inspired by pnpm, we've refactored and implemented cnpm/npminstallin cnpm to utilize symlinks. But it didn't make use of hard links, neither did it hoist transitive dependencies.

However, it is worth noting that there are some potential issues of this approach:

In addition, yarn also proposed other optimizations such as Plug'n'Play. Since it is too radical to be compatible with the existing Node.js ecosystem, we will not discuss those optimizations further here.

Let's take a look at the dependencies installation process:

Since the number of dependencies is typically very large, the total number of HTTP requests is subsequently magnified, resulting in a significant increase in time consumption. In the above example, npm@2 will make more than 2500 HTTP requests.

A common optimization strategy is to calculate the dependencies graph in advance, so that package managers can download 'tgz's directly without querying the package metadata. As a result, much of the network requests can be avoided.

NPM is the first to come up with the idea of shrinkwrap. It was soon superseded by the idea of lockfile from yarn. There're similar concepts in pnpm but different formats.
Although lockfile was meant to lock the dependency versions, people discovered that the lockfile could also be used as a dependencies graph to speed up installations.

To summarize, to speed up the installation process, we need to think about:

The community was able to reach some common ground where:

What are tnpm and cnpm?

As shown in the above diagram, briefly speaking:

tnpm is not only a local command-line interface, but also a remote registry service that allows deeper optimization compare to other package managers.

If you can't measure it, you can't improve it. - Peter Drucker 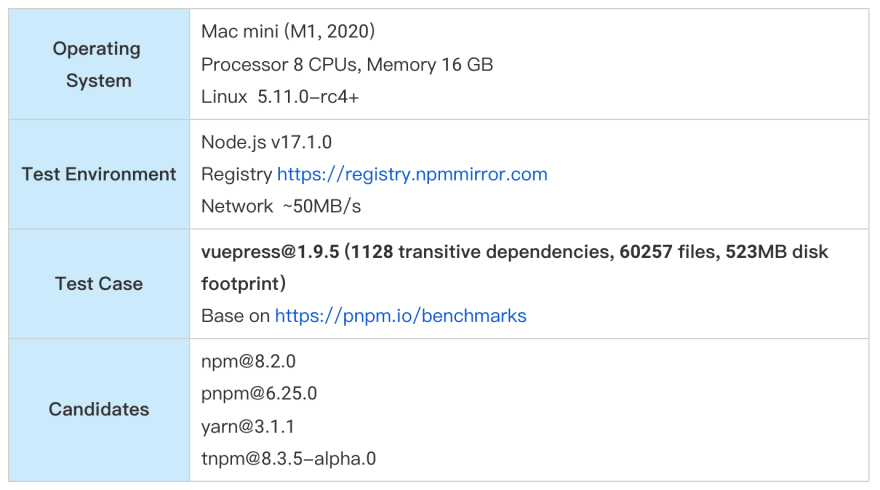 PS: We are probably the first company in the industry to re-install Mac mini m1 with Linux OS to form a front-end build cluster. This reinstallation itself doubled our overall build speed on top of all the other optimizations.

We will not interpret the result for now. You'll get more in-depth feeling and understanding after we systematically discuss the optimization ideas for tnpm rapid mode.

Recall the data we gave earlier at the beginning of our analysis about the reasons behind the overall slowdown. The complete datasets are shown below.

We collect the relevant data, without lock or cache, by strace and charles. We also counted the corresponding file counts and sizes.

Here is the brief interpretation:

From the data, we can see that tnpm is more optimized for both Disk IO and Network IO.

How were the optimizations achieved?

We only have one goal in optimizing the network I/O: how do we maximize the network utilization?

Our experience and philosophy in our enterprise-scale projects are that we do not advocate locking versions locally but only reuse the dependencies graph from the previous phase in the iteration workflows, such as from development environments to test environments (or emergency iterations). (Locking version vs not locking version is a common topic for debates. There is no common consensus. Finding the respective balance based on the enterprise team's situation is generally recommended. We will not discuss it here.)

There's no such 302 redirection in the official npm registry. We separated the download traffic from the registry by redirecting them to CDN-cached OSS addresses, which improved the stability of the registry service.

The third optimization is to combine the files:

The fourth optimization is to use Rust to reimplement the download and decompressing process:

cnpm is not Rust-base implementation.

We believe the original nested directory approach is better than the flattening node_modules one. But we don't want the compatibility issues caused by symlinks. How can we hit two birds with one stone?

Sounds abstract? Let's think of an analogy that front-end developers are familiar with: using ServiceWorker to refine and customize HTTP Cache-Control Logic.

Similarly. We can think of FUSE as the file system counterpart of ServiceWorker, from the perspective of front-end developers. We can take over a directory’s file system operation logic via FUSE.

In this way, we were able to achieve that:

nydus doesn't support macOS at the moment, so we implemented an adapter of nydus to macfuse. We'll open source it when it's ready.

Trivia: Nydus is a Zerg structure in StarCraft, which is used to move units quickly around the map.

We may need to temporarily modify the code inside node_modules during our day-to-day development for debugging. Editing files within a module can inadvertently lead to changes in another module because of how symbolic and hard linking solutions work.

FUSE supports custom write operations, but the implementation is more verbose. So we directly use a union mount filesystem OverlayFS. 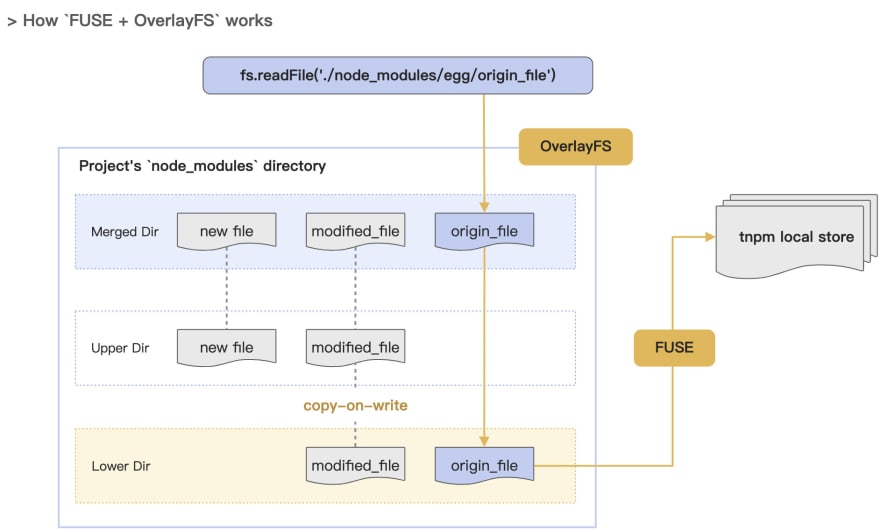 So, we further implement:

Next, let's talk about the global cache. There are two main options in the industry:

What they both have in common is that at some point, the tgz files would be decompressed to standalone files and written to the disk. As we mentioned above, huge amount of small files generated by decompression can cause a huge amount of I/O operations.

So, we went one step further:

Some other attempts: we tried to use stargz + lz4 instead of tar + gzip, but the benefits were not significant:

No solution can be perfect, and there are some extra costs to our solution.

The first one is the cost of FUSE:

The second one is the maintenance burden of the registry server:

PS: Community's solution, including ours, cannot solve the problem of multiple "require cache" for the same dependency. Maybe it can be solved by ESM Loader but it is beyond our discussion today. 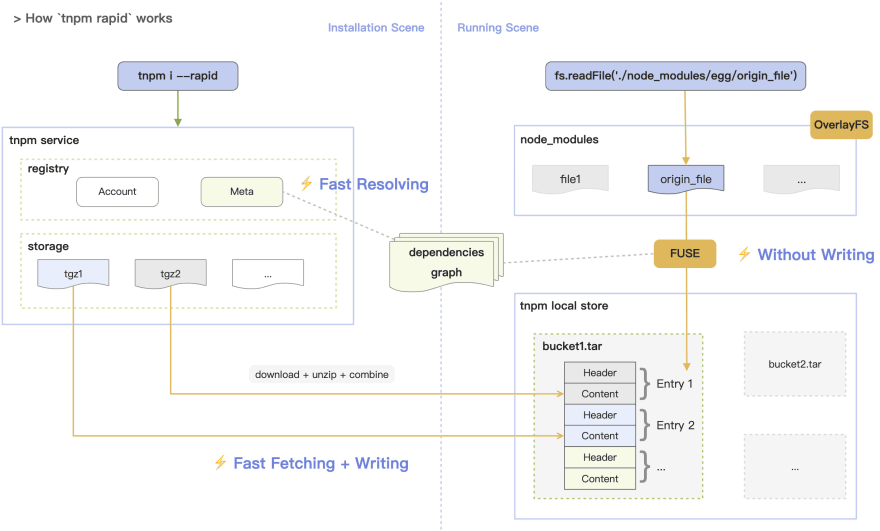 In conclusion, the core advantages of our solution are:

The difference between black magic and black technology is that the former is a pile of "this-is-fine" dirty hacks to achieve the goal, while the latter is a cross-disciplinary juggernaut to solve challenges once and for all. FUSE is our Dual-vector Foil.(The Three-Body Problem)

From the above analysis, one might already fully understand the optimization idea of tnpm rapid mode. Now let's go back and interpret the data of the previous test results.

Note: 'tnpm rapid mode' is still under small-scale testing, and improvement is expected in future iterations. So the test data is for reference only.
Also, yarn in the table is slower than npm@8. We don't know why for now, but we've tested it many times with pnpm benchmark, and the same results kept showing up.

Here are the brief interpretations:

(1) The time taken to generate the dependencies graph.

In the enterprise scenario, the dependency modules are relatively convergent, so most of the time, the first test of tnpm should take 5 seconds in case of hitting the cache(the dependencies graph generation of tnpm has a caching mechanism).

To summarize: the speed advantage of tnpm over pnpm is 5 seconds for dependencies graph + 4 seconds for FUSE free decompression.

Front-end package management has been developing for nearly a decade. Npm was once the trailblazer who kept innovating and advancing this area. However, the advancement was somewhat stagnated after npm won against all the other alternatives like bower. Soon after, Yarn became the challenger and rejuvenated the overall competition, pushing further innovation on npm. Pnpm raised from the new challenge and led the innovation again.

We believe that for front-end dependency optimization and governance, there is still a long way to go. We hope to continue strengthening cooperation with our domestic and international colleagues to keep pushing the advancement of package managers together.

cnpm isn’t trying to be the replacement to the existing package managers. We have always been an enterprise-ready solution for building an on-premise private registry. We don’t recommend developers to use cnpm cli without that specific need. pnpm and yarn are good enough.

npmfs is a package manager agnostic tool by design. We hope it benefits not only cnpm/tnpm but also all the package managers that the community loves.

If the community recognizes the solution we propose, we would love to contribute to other well-accepted package managers. Please stay tuned for npmfs to be open source!

Therefore, our subsequent plan is to give our experience gathered from enterprise-level private deployment and governance back to the community as much as we can.

In the meantime, it would be highly beneficial for the community if we could work together to standardize the front-end package management:

Node.js is an indispensable infrastructure in the field of front-end. Maybe the future changes of front-end would make all existing engineering problems irrelevant. Nonetheless, no matter what will happen, I just hope that I can seriously record what I see and think in this field. I'd like to exchange ideas with colleagues who are experiencing the evolution of the current "front-end industrialization" and are equally troubled by it.
​

In the enterprise application scenario, optimization of front-end build execution speed is a system engineering challenge. Dependency resolution and installation is only one of the many challenges we are facing. The opportunities are abundant. We are continuously looking for talented engineers to join us, and keep pushing the innovation forward. We look forward to hearing from you.