Understanding the blockchain and decentralized applications is hard. But learning fundamental concepts increases the speed of understanding. In this article, concepts of digital keys, signatures and addresses are explored based on programming perspective. They can be really useful when you want to implement blockchain apps like wallets, mining software, bitcoin explores, bitcoin e-commerce etc.

What is decentralization in bitcoin

Decentralized systems are are interconnected systems where no party has overall control of they system. As digital payment system, bitcoin provide this form of system where there is no central entity (like banks) that control the flow of transactions.

The cryptography behind: keys and signatures

Digital keys and signatures are fundamental to decentralization of trust. Bitcoin uses pair of related keys(private and public) based on public-key cryptography. Private keys are only known to owner while public keys are may be known by anyone. A sender encrypts a message with receiver's public key(shared publicly) , and sends it publicly, it can only be decrypted with receiver's private keys.

In bitcoin transaction Digital Signature or witness is used to prove that one has a private key connected to public key without revealing the private key. Private keys are used to produce digital signature. While signature can be verified by anyone with public key, it can only be produced by someone with knowledge of private key. This concept of verification of transactions is important because bitcoin is based on peer to peer network.

Recipient's public key is not shared publicly itself, it is represented by bitcoin address which works as beneficiary name in banking. Private keys are like pass code and public keys are like account numbers. Witness or digital signature is like normal hand signature that shows you are the owner of account.

All these keys are related to each other. Hash function are used to transform keys from one form to another e.g from private key to form public keys, public keys to bitcoin address.

Generating keys is like choosing random number. Bitcoin uses 256-bits number for randomness. Any number is picked at range of 1 to ~2**256. Simply a binary number with 256 1s and 0s like:-

Here is the code..

The above key is hexadecimal(Hex), represented in Base64 which includes 64 characters(52 lowercase and capital letters, 10 numerals, 2 more characters "+" and "/" ).

Some character can be easily mistaken or confused e.g letter l, number 1 and letter I, letter O and zero 0.

Bitcoin uses Base58 encoding to represent keys, the same as Base64 but it excludes 6 characters(0,O,l,I,+ and /). So the bitcoin Base58 alphabet is 123456789ABCDEFGHJKLMNPQRSTUVWXYZabcdefghijkmnopqrstuvwxyz

Base58check encoding is like error-checking code, it prevents inscriptional errors.

The Base58check encoded private key with 5 prefix is called Wallet Import Format(WIF) which is used in importing and exporting keys in wallets and generating QR codes.

It can be done in four steps

Lets write some code to do the trick, with help of sha256 and bs58 libraries.

Because private key is your secret, we can use the private key to create signature that anyone can verify without having the actual private key with the help of public key.
Public key is generated from private key by using one way cryptographic function called Elliptic Curve Multiplication where its easy to do in one direction but impossible to do in reverse. It involves some complex maths, you can learn more math here and here.

Elliptic-curve cryptography (ECC) is an approach to public-key cryptography based on the algebraic structure of elliptic curves over finite fields. ECC allows smaller keys compared to non-EC cryptography (based on plain Galois fields) to provide equivalent security. - Wikipedia

In bitcoin, there is special parameters for elliptic curve called secp256k1 with ECDSA algorithms as defined in [Standards for efficient Cryptography(SEC)] learn more.

Bitcoin address is an actual string of alphanumeric characters that can be shared with anyone want to send you money. In bitcoin transactions, it appears as recipient of funds. Usually start with 1 or 3.

Bitcoin address is derived from public key through one-way cryptographic hashing algorithms specifically, Secure Hash Algorithm(SHA256) and RACE Integrity Primitives Evaluation Message Digest (RIPEMD160). A public key is passed on SHA256, the result is computed with RIPEMD160 to generate public key hash which is then encoded with base58check encoding. the result is bitcoin address B.

Bitcoin Address = RIPEMD160(SHA256(P)). We can use specified javascript implementations to do the trick

Checking our the work

Now we have a Bitcoin address that can receive and send bitcoins. We can check if the address is valid through this bitcoin explorer 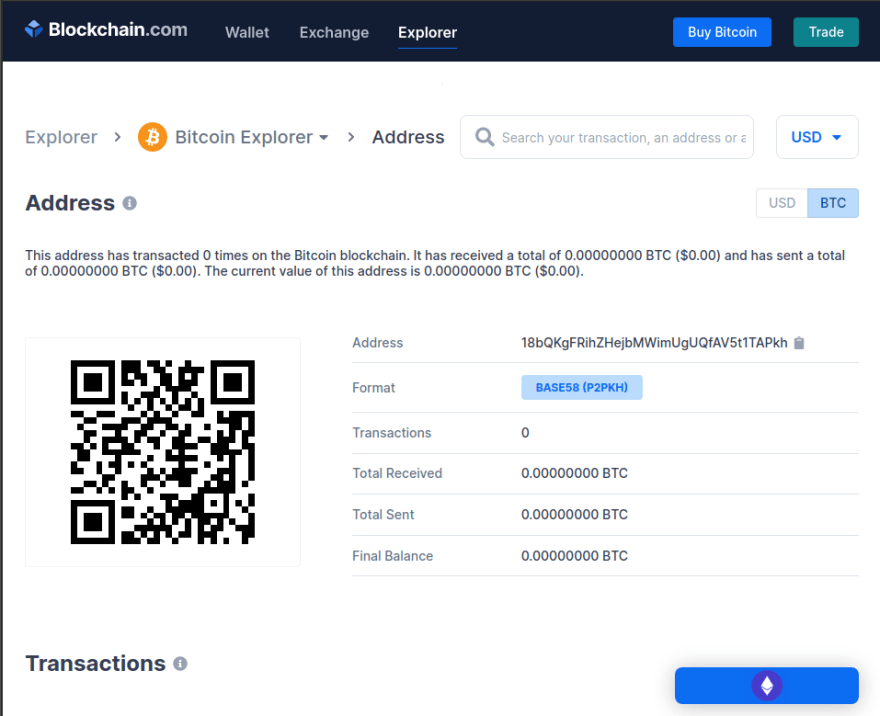 You now can generate your own bitcoin address and use for transactions. There is some more improvement of bitcoin keys that I haven't touched as this article is based on understanding the basics of generating bitcoin keys. Good understanding of the process of generating these keys, play a big role in working with bitcoin stuff, e.g keys and addresses, signing and verification of transactions etc.

If you have any thought about this article, you can you can mail me at jose@astrojose.xyz

What is a Web3 and Decenralized Network? Why is it important?