Serialization is a way of taking data and storing it or transferring data to other systems, machines, or applications. Deserialization is the act of extracting a data structure from a series of bytes, like parsing a YAML or JSON configuration file.

This often happens because a developer doesn't realize that a user has control over the data that they later will be deserializing for use in other parts of the application.

While some static analyzers can do pattern matching to see if you are using specific unsafe deserialization libraries (For example, looking for instances where you are using Marshal.load(), which is inherently unsafe), these tools very easily miss scenarios where the source of the data is not easily observed. Also not every use of these methods is unsafe, so you can end up with many false positives.

The best way to understand what your code is doing is to watch it execute at runtime. Doing this while it is still in local development, provides insights into its behavior to identify security vulnerabilities and performance issues at the earliest possible moment.

In this example, we’ll analyze the runtime behavior of the OWASP Railsgoat project, which is a vulnerable Ruby on Rails application. This project demonstrates the OWASP Top-10 and is a great project for educating developers and security teams.

AppMap can already analyze web applications (using a technique called Remote Recording), but this project supports Docker, which is another way you can run your application to remote record it with AppMap.

The key benefit of Docker is that it allows users to package an application with all of its dependencies into a standardized unit for software development.

Remote recording is helpful if your project lacks extensive tests, or when you want to record a specific user flow or functional test that isn’t represented within an already existing test.

To get started, make sure you already have AppMap installed into your project, you can follow the AppMap docs for setup instructions based on your application language.

At this point, we can access http://localhost:3000 to navigate around this Rails application. If your Docker configuration is set up differently, and you are not forwarding ports over, you’d simply connect to the IP address on the Docker container to interact with the application.

NOTE - You'll need Nodejs to run the commands below.

One way to record AppMaps is by running your test suite, and you can run npx @appland/appmap record test in the root of your project to kick off your tests with AppMap enabled.

You can record AppMaps by running your tests (if they exist), but in this scenario we'll running a remote recording instead.
Run npx @appland/appmap record remote then you’ll be guided through the process of connecting to the running application to record your interaction.

You can also use the VS Code extension and select on a record button or use the command palette to start a remote recording. 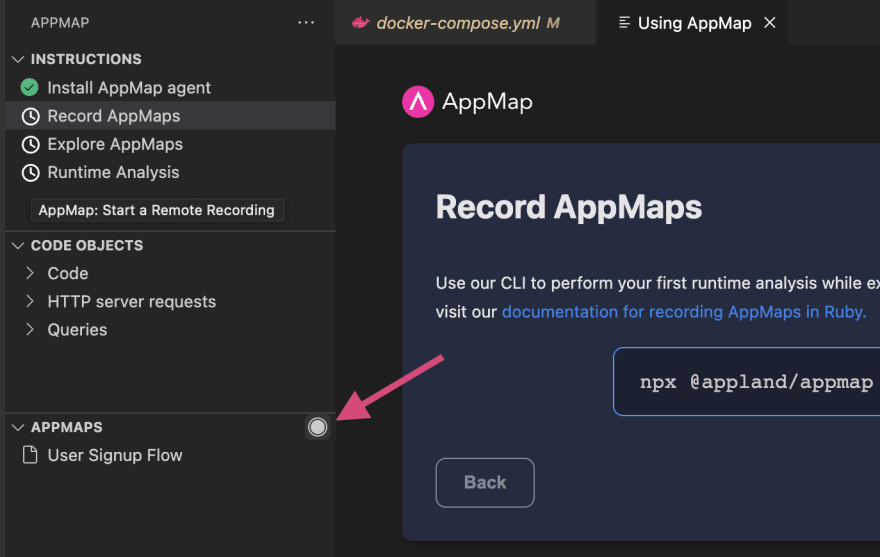 When we use either of those ways to kick off a remote recording, we’ll enter the URL where our application is running, either localhost if you forwarded a port or the IP address of your docker container.

With recording starting I will navigate through the user password reset flow. It’s important to keep your remote recordings specific towards a single user interaction, and keep them from growing needlessly large.

Going back to VS Code I'll stop the AppMap recording, and will enter a name for the AppMap we recorded, calling it "User Password Reset", then the AppMap opens in VS Code. 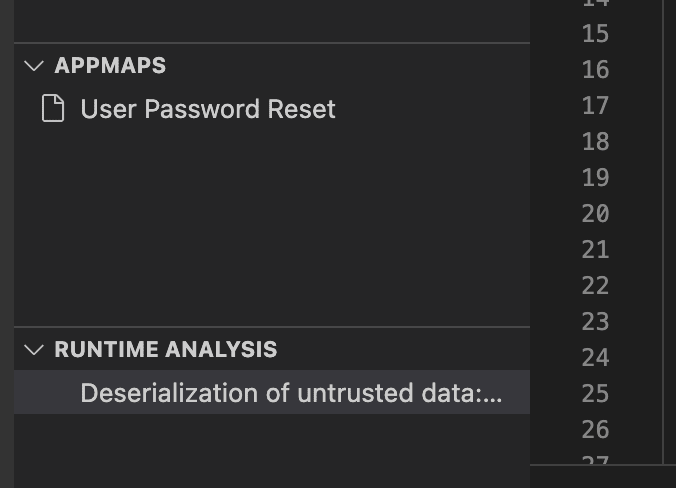 The AppMap will be instantly scanned with AppMap Analysis (You can enable early access here) locating our security issue. A deserialization of untrusted data, which would allow an attacker to exploit my web application.

By clicking on the issue, I'll get taken to the trace view in the AppMap where this issue occurs, I can see the parameters sent and the return values. 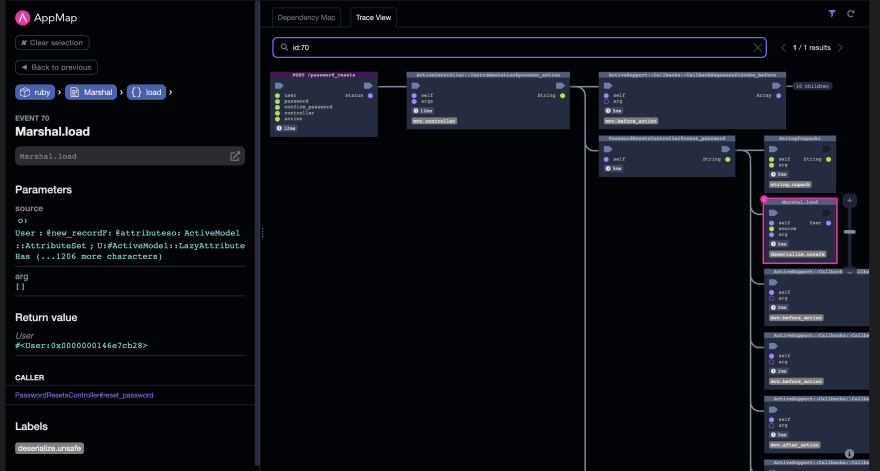 From here we can see the code that calls this method call is the PasswordResetsController#reset_password function and I can navigate directly to that line of code from inside the AppMap.

According to the OWASP Railsgoat project the issue with this code is:

During the forgot password flow, after the user clicks on the reset email link, the application verifies the token then adds a Marshaled user object which is posted during the password reset.

As mentioned above, the Ruby Standard Library warns of this by saying:

By design, ::load can deserialize almost any class loaded into the Ruby process. In many cases this can lead to remote code execution if the Marshal data is loaded from an untrusted source.
As a result, ::load is not suitable as a general purpose serialization format and you should never unmarshal user supplied input or other untrusted data.

To fix this issue, we should investigate if we need to even accept a Marshaled user object from the UI. A smarter solution would be to serialize this user data as JSON to send to the backend. Deserialization with JSON is always safe and we can parse the data as strings to reset the user password. Alternative options are to use the YAML.safe_load and adding the specific classes to be deserialized to an allow list.

In practice, depending on a static analyzer to find this problem can bring false negatives (missing stuff) and false positives (false alarms) which are both pretty big problems. False positives because they create so many false alarms that developers just ignore everything - including true positives. Only with the runtime analysis can you see the true source of the data to understand the risk.

Install AppMap for VS Code or JetBrains and give it a spin.

How to fine-tune your embeddings for better similarity search

AppLand is the creator of AppMap, Google maps for code.

Once suspended, appland will not be able to comment or publish posts until their suspension is removed.

Once unsuspended, appland will be able to comment and publish posts again.

Once unpublished, all posts by appland will become hidden and only accessible to themselves.

If appland is not suspended, they can still re-publish their posts from their dashboard.

Once unpublished, this post will become invisible to the public and only accessible to Pete Cheslock.

Thanks for keeping DEV Community 👩‍💻👨‍💻 safe. Here is what you can do to flag appland:

Unflagging appland will restore default visibility to their posts.