Since there are many types of SQL, this article focuses on the analysis of query SQL. Doris's SQL analysis will be explained deeply in the algorithm principle and code implementation.

Apache Doris is an easy-to-use, high-performance and unified analytics database based on MPP architecture, mainly used to solve real-time reports and multi-dimensional analysis. The Doris architecture is straightforward, with only two types of processes.

Frontend（FE）: It is mainly responsible for user request access, query parsing and planning, storage and management of metadata, and node management-related work.

Backend（BE）: It is mainly responsible for data storage and query plan execution.

In Doris' storage engine, data will be horizontally divided into several data shards (Tablet, also called data bucket). Each tablet contains several rows of data. Multiple Tablets belong to different partitions logically. A Tablet only belongs to one Partition. And a Partition contains several Tablets. Tablet is the smallest physical storage unit for operations such as data movement, copying, etc.

SQL parsing in this article refers to the process of generating a complete physical execution plan after a series of parsing of an SQL statement.

The lexical analysis will identify the SQL in the form of a string into tokens, in preparation for the grammatical analysis.

The syntax analysis will convert the token generated by the lexical analysis into an abstract syntax tree based on the syntax rules, as shown in Figure 2. 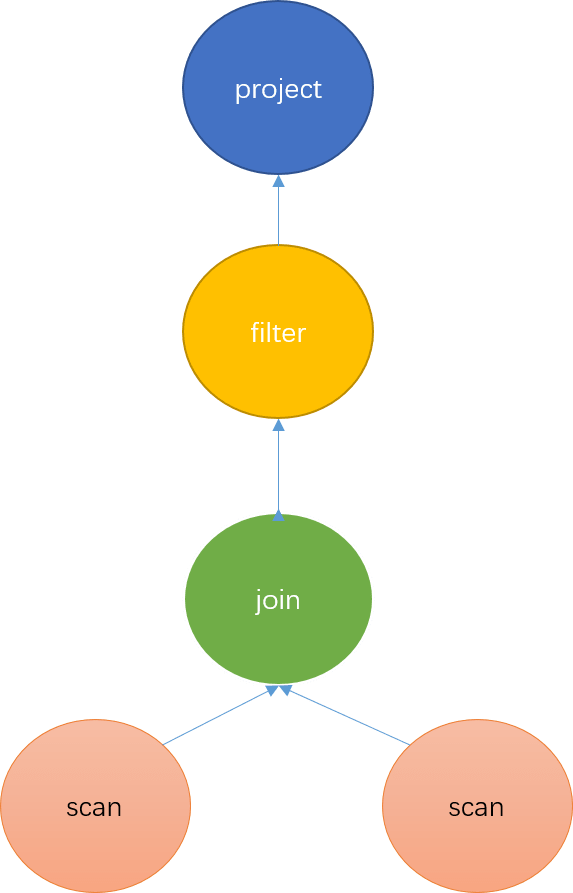 The design goals of the Doris SQL parsing architecture are:

In terms of code implementation, it corresponds to the following five steps: Parse, Analyze, SinglePlan, DistributedPlan, and Schedule, which as shown in Figure 4. 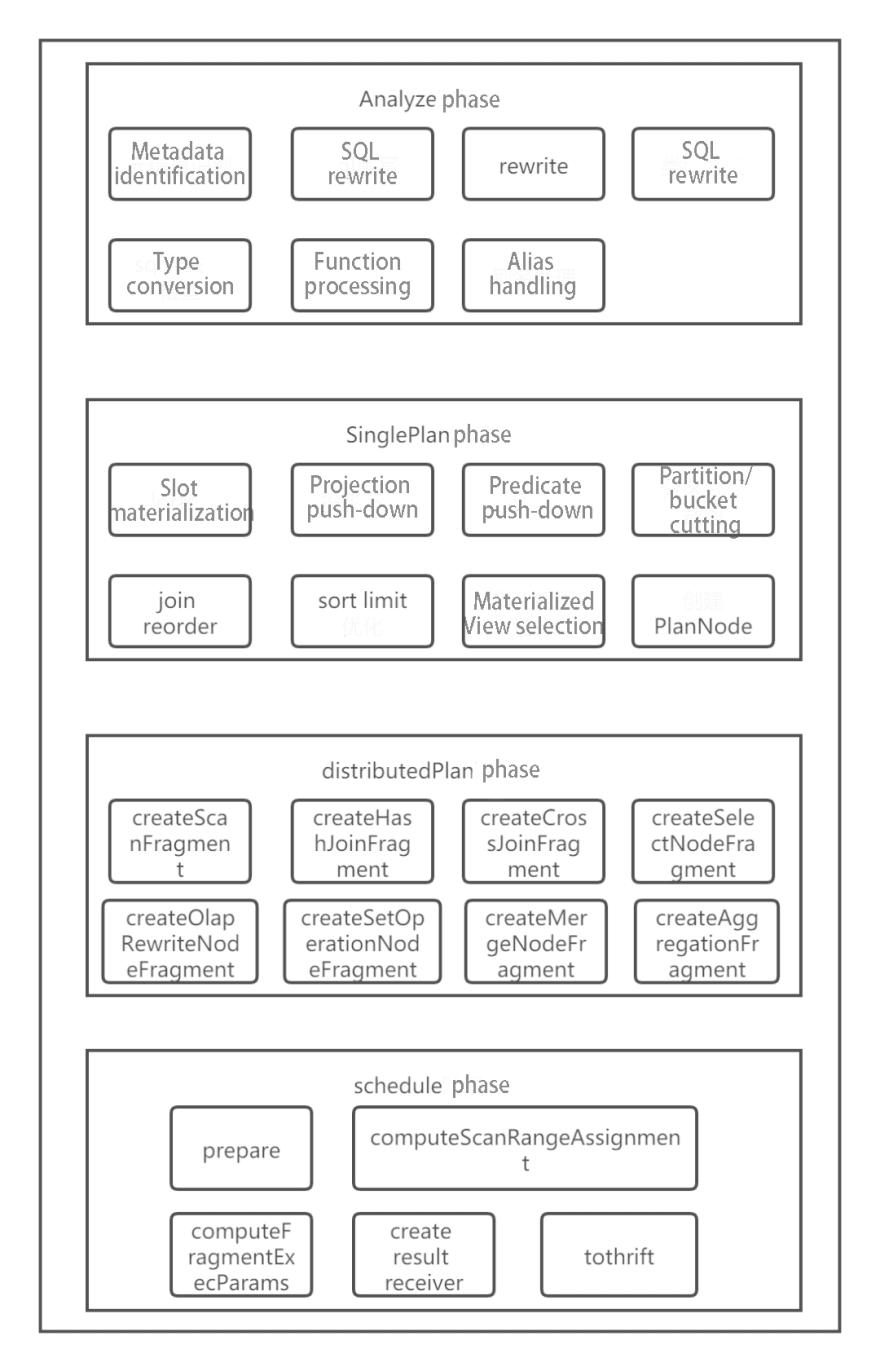 Since there are many types of SQL, this article focuses on the analysis of query SQL. 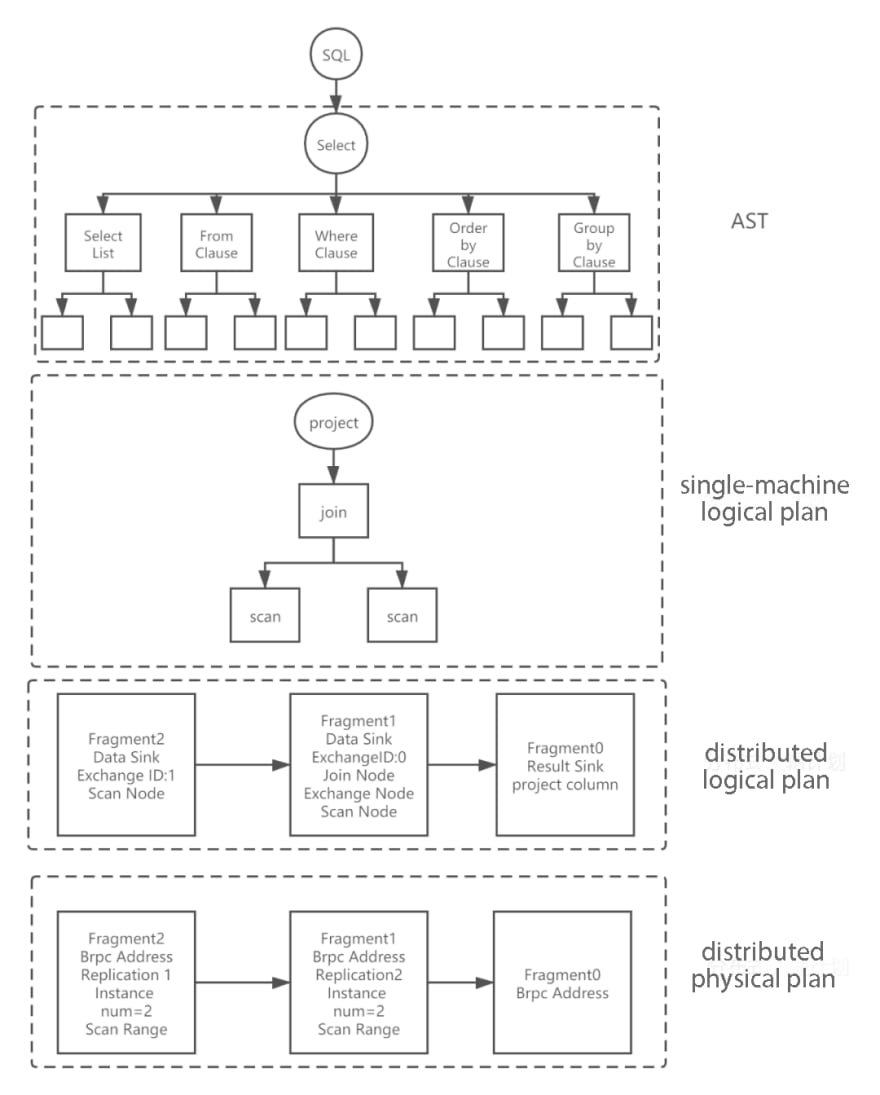 AST has a tree-like structure, which represents a piece of SQL. Therefore, different types of queries -- select, insert, show, set, alter table, create table, etc. will generate additional data structures after Parse (SelectStmt, InsertStmt, ShowStmt, SetStmt, AlterStmt, AlterTableStmt, CreateTableStmt, etc.). However, they all inherit from Statements and will perform some specific processing according to their own grammar rules. For example: for select type SQL, the SelectStmt structure will be generated after Parse.

All structures in AST are composed of basic structure expressions--Expr by using various combinations, as shown in Figure 6. 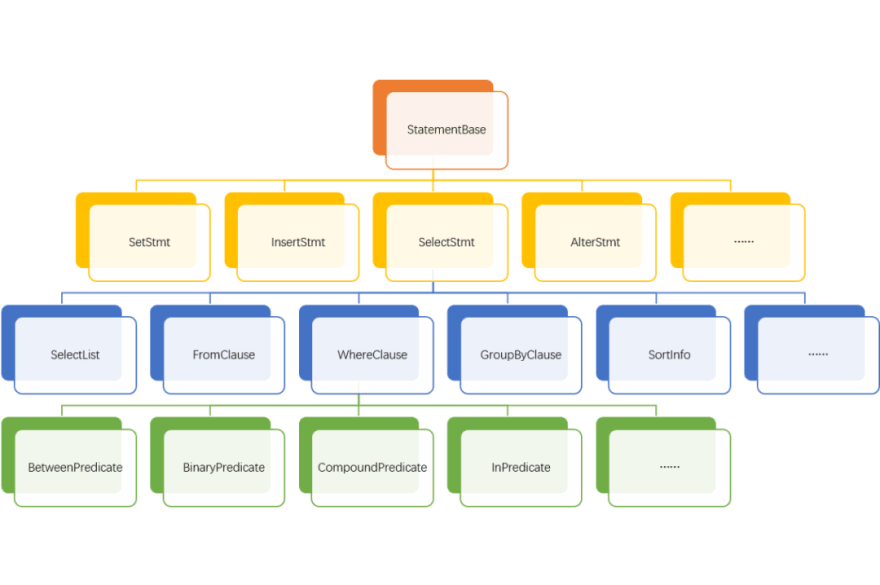 Analyze will perform pre-processing and semantic analysis on the abstract syntax tree AST generated in the Parse phase, preparing for the generation of stand-alone logic plans.

The abstract class StatementBase represents the abstract syntax tree. This abstract class contains a most crucial member function--analyze(), which is used to perform what's needed to do in Analyze phase.

For example, a query of select type will be converted into analyze() of the sub-statements SelectList, FromClause, GroupByClause, HavingClause, WhereClause, SortInfo, etc. of select SQL. Then these sub-statements further analyze() their sub-structures, and various scenarios of various types of SQL are analyzed by layer-by-layer iteration. For example, WhereClause will further explore the BetweenPredicate, BinaryPredicate, CompoundPredicate, InPredicate, etc., which it contains.

After analyzing the AST, a rewrite operation will be performed again to simplify or convert it into a unified processing method. A present rewrite algorithm is a rule-based approach. It will rewrite the AST with each rule from bottom to top, based on the tree structure of the AST. If the AST changes after rewriting, analysis and rewrite will start again until there is no change in the AST.

At this stage, algebraic relations will be generated according to the AST abstract syntax tree, also known as the operator number. Each node on the tree is an operator, representing an operation. 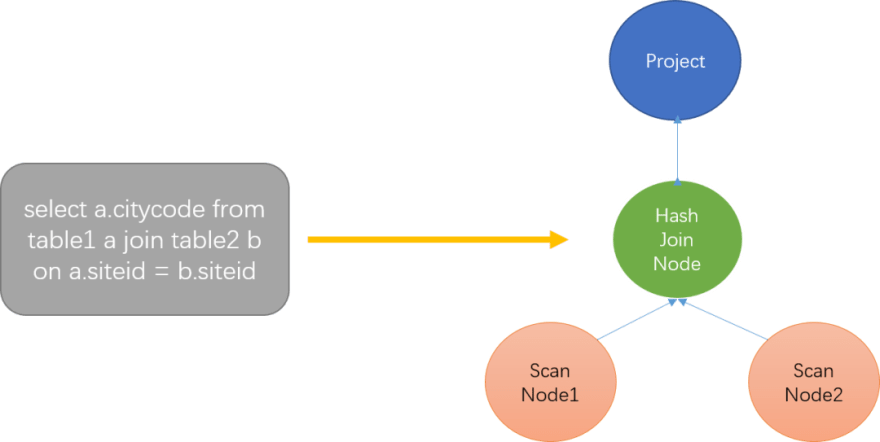 Without optimization, the generated relational algebra is very expensive to send to storage and execute.

As shown in Figure 8, for unoptimized relational algebra, all columns need to be read out for a series of calculations. In the end, siteid and pv column are selected and output. A large amount of useless column data wastes computing resources.

When Doris generates algebraic relations, a lot of optimizations are made: the projection columns and query conditions will be put into the scan operation as much as possible.

Specifically, this phase mainly does the following tasks:

Figure 9 shows an example of optimization. The optimization of Doris is carried out in generating relational algebra. Generating one will optimize one.· Projection pushdown: BE only scans the columns that must be read when Scanning.

After the single-machine PlanNode tree is generated, it needs to be split into a distributed PlanFragment tree (PlanFragment is used to represent an independent execution unit) according to the distributed environment. A table's data is distributed across multiple hosts could allow some computations to be parallelized.

The primary purpose of this step is to maximize parallelism and data localization. The primary strategy is to split the nodes that can be executed in parallel and create a separate PlanFragment. ExchangeNodes will replace the split nodes to receive data. Finally, a DataSinkNode will be added to the split node to transmit the calculated data to the ExchangeNode for further processing.

This step adopts a recursive method, traverses the entire PlanNode tree from bottom to top, and then creates a PlanFragment for each leaf node on the tree. If the parent node is encountered, splitting the child nodes that can be executed in parallel will be considered.

For query operations, the join operation is the most common. 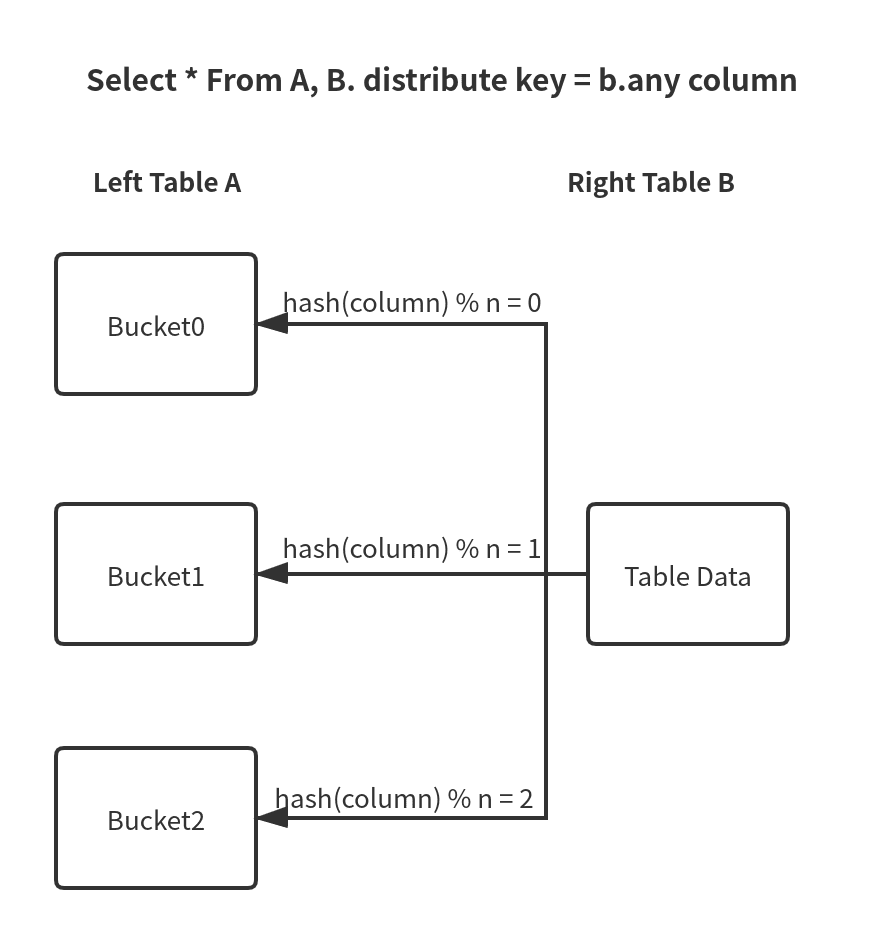 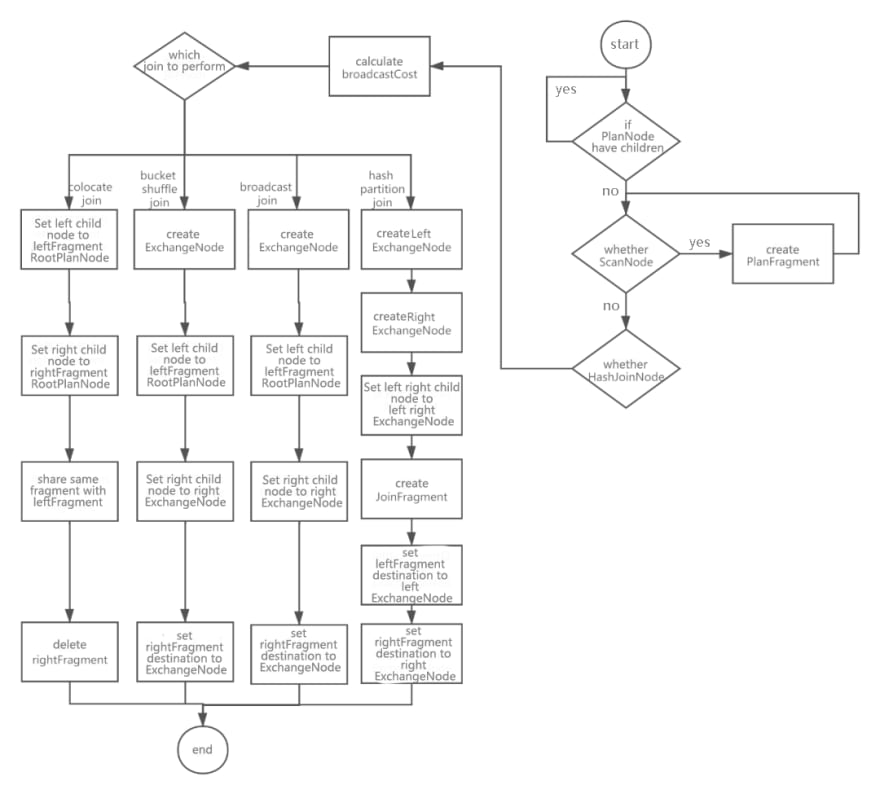 Figure 12 is an example after the join operation of two tables is converted into a PlanFragment tree, there are 3 PlanFragments generated. The final output data passes through the ResultSinkNode node. 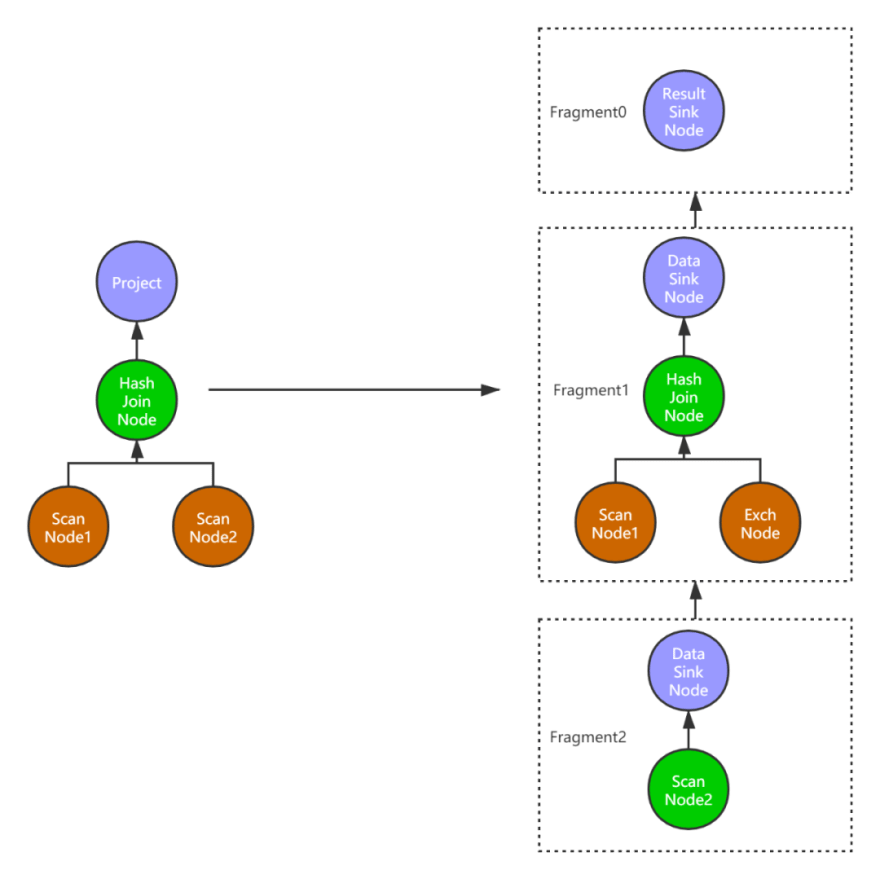 This step is to create a distributed physical plan based on the distributed logical plan. will solve the following questions:

b. computeScanRangeAssignment phase：Different processing is performed for different types of joins.

d. Create result receiver stage：The resulting receiver is where the final data needs to be output after the query is completed.

e. to thrift stage：Create RPC requests based on FInstanceExecParam of all PlanFragments, then send them to the BE side for execution. A complete SQL parsing process is completed. 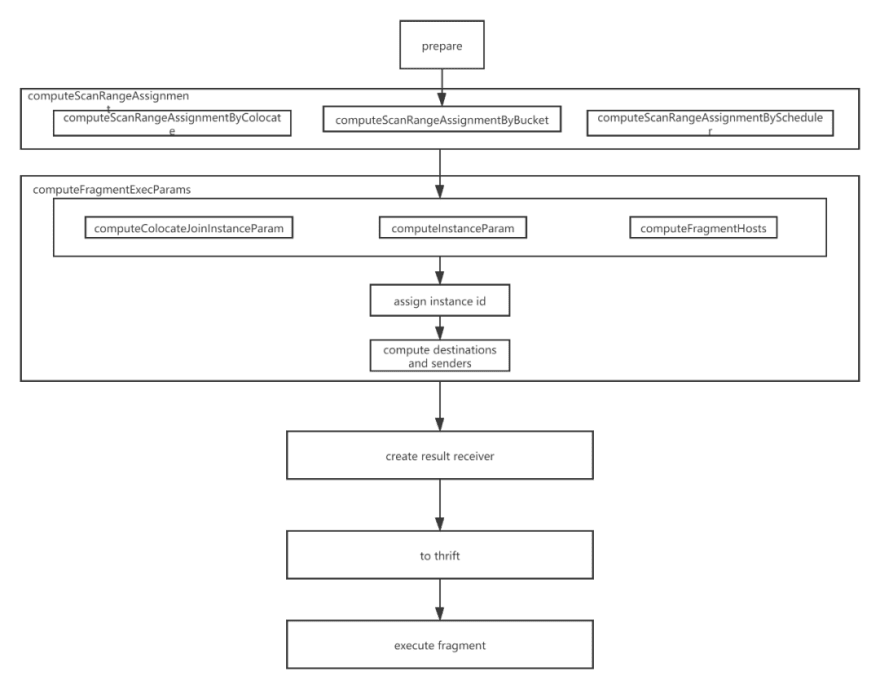 Figure 14 is a simple example. The PlanFrament in the figure contains a ScanNode. The ScanNode scans three tablets. Each tablet has two copies, and the cluster assumes that there are two hosts. 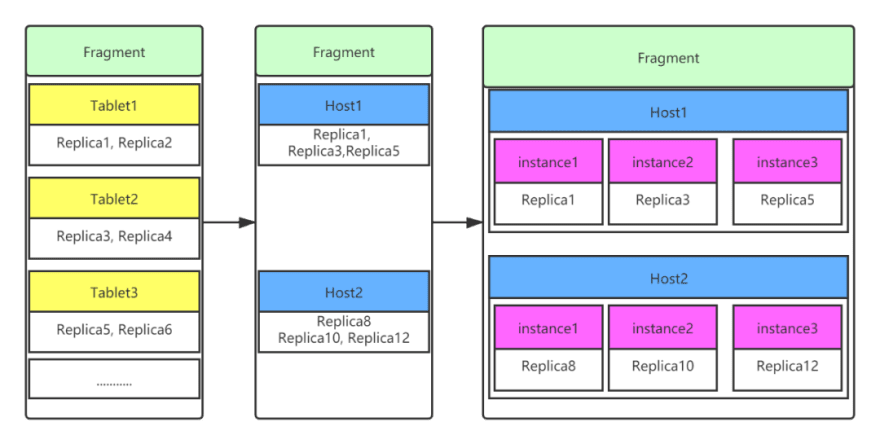 This article first briefly introduces Apache Doris and then introduces the general process of SQL parsing: lexical analysis, syntax analysis, generating logical plans, and generating physical plans. Then, it presents the overall architecture of DorisSQL parsing. In the end, the five processes: Parse, Analyze, SinglePlan, DistributedPlan, and Schedule are explained in detail, and an in-depth explanation is given of the algorithm principle and code implementation.

Doris complies with the standard methods of SQL parsing. Still, according to the underlying storage architecture and distributed characteristics, many optimizations have been made in SQL parsing to achieve maximum parallelism and minimize network transmission, reducing a lot of burden on the SQL execution level.

Give me some advice, which Reacts open-source project is suitable to contribute for intermediate React developers?

Once suspended, apachedoris will not be able to comment or publish posts until their suspension is removed.

Once unsuspended, apachedoris will be able to comment and publish posts again.

Once unpublished, all posts by apachedoris will become hidden and only accessible to themselves.

If apachedoris is not suspended, they can still re-publish their posts from their dashboard.

Once unpublished, this post will become invisible to the public and only accessible to Apache Doris.

Thanks for keeping DEV Community 👩‍💻👨‍💻 safe. Here is what you can do to flag apachedoris:

Unflagging apachedoris will restore default visibility to their posts.