Welcome to this tutorial on how to build a full-stack application with Amplication.

What we will do is go step by step to create a Todos application using Angular for your frontend and Amplication for your backend.

If you get stuck, have any questions, or just want to say hi to other Amplication developers like yourself, then you should join our Discord!

Hopefully, you've had the chance to create an Amplication account, but if not, don't fret! Visit https://app.amplication.com/ and you'll be directed to the login screen. Here you can log in to an existing Amplication account, or create one, by signing in with a GitHub account. You should end up at the New App page, but if not you can get to it here.

Click the New App button in the top right corner. 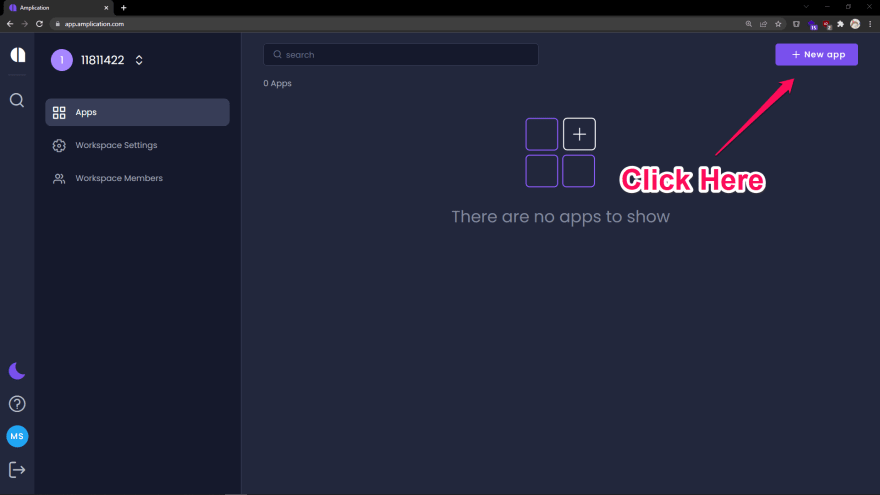 Select Start from Scratch and wait a few seconds for the app to be generated. You'll be directed to the application's entities. An entity is equivalent to a collection in a NoSQL database or a table in a relational database. 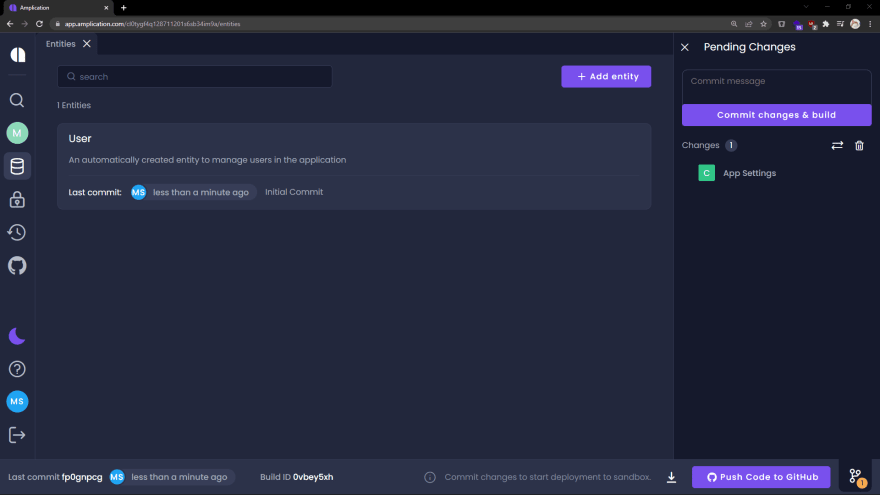 By default, a User entity is created for you. This entity will eventually help us handle authentication. But first, let's deal with the backend.

The main entity will be used to store tasks created by users. 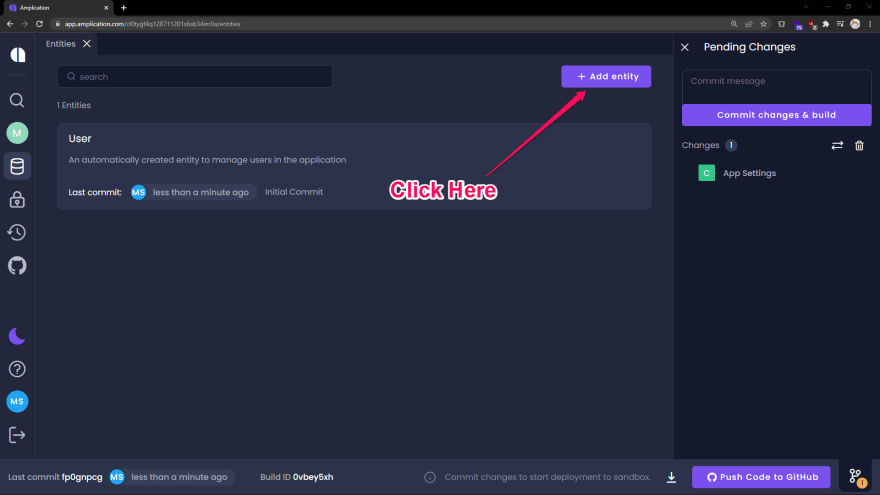 When a New entity modal appears, input Task into the input field and click Create Entity. With the entity created we'll want to define a few fields for task elements.

On the left-hand panel, you'll see the Fields this entity has, and at the very bottom, there will be an option to add a field. 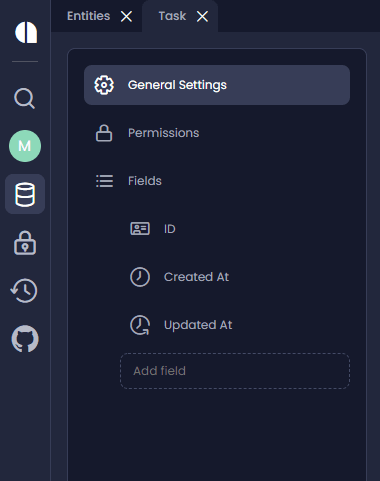 The first field will be Text. Type that into the Add field input and hit enter. The new field will be created and a few options will appear. 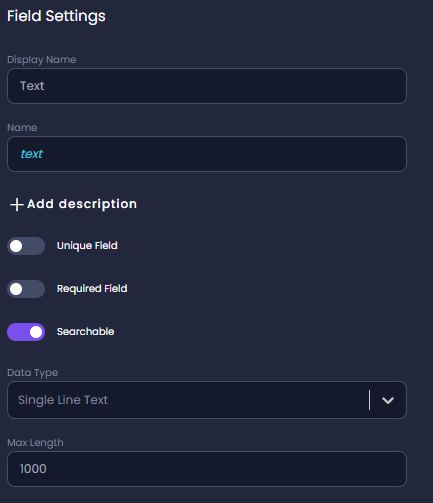 Notice a dropdown for the Data Type of this field is set to Single Line Text. That's perfect as it'll be a string input of a task. There are many different data types Amplication can enforce for fields.

The only change that needs to be made here is this will be a required field. Toggle the Required Field switch.

Changes will be automatically saved.

Like before, create a new field called Completed. This field should also be a required field, but we will change the data type. Click the Data Type dropdown and change this field to be a Boolean.

The final field we will need to create should be called UID. This field will be used to relate a task to a user. Mark this as a required field. In the Data Type dropdown select Relation to Entity.

The Related Entity dropdown should appear, select User. A modal asking to create a relation between a Task and a User will appear. Click Create to create the relation. To learn more about entity relations, there's an article on the docs website here.

Amplication allows for granular permission to create, read, update, and delete entries in the different entities of the backend.

User's who will be creating tasks in the Todo app will need to be granted certain permissions to create, read, and update their tasks and prevent them from doing other things. 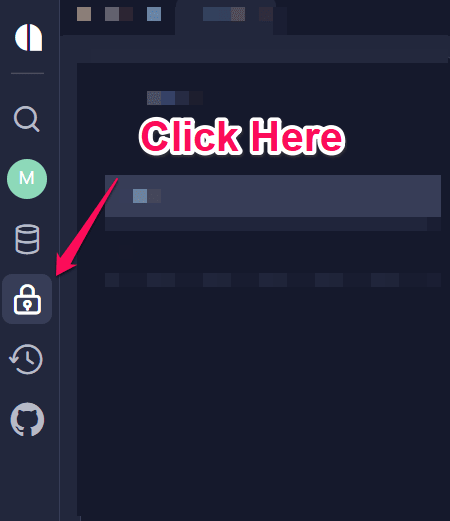 Then, much like the properties, we added to the Task entity, create a role called Todo User. 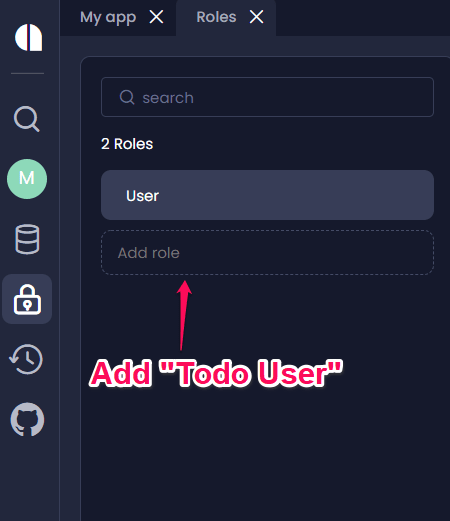 With a role for users of the Todo app created, we'll want to assign certain permissions to the Todo User role. 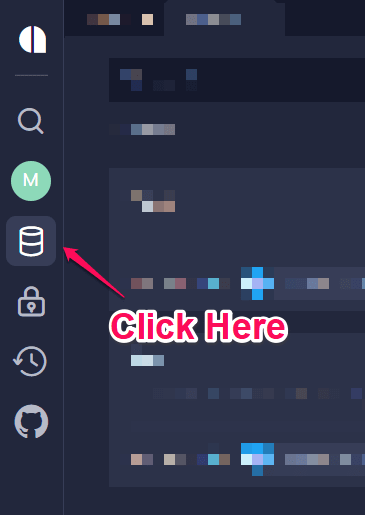 By default, every role has CRUD (create, read, update, and delete) access to every entity. It is important to limit the scope of our Todo users.

Select the User entity from the list of entities, and on the left-hand, panel select Permissions.

Every type of command is granted to All Roles. Users with the User or Todo User role have full access to the User entity. This can be dangerous.

The default admin account created by the backend has the role User, so we don't want to mess with that. What we will eventually do is have it so all new users are assigned the Todo User role, and we will limit their access to certain commands.

Toggle the permissions for each of the entity's commands to Granular and toggle on the User role. Now the only user who can access User accounts will have the User role, which will belong only to the admin account. 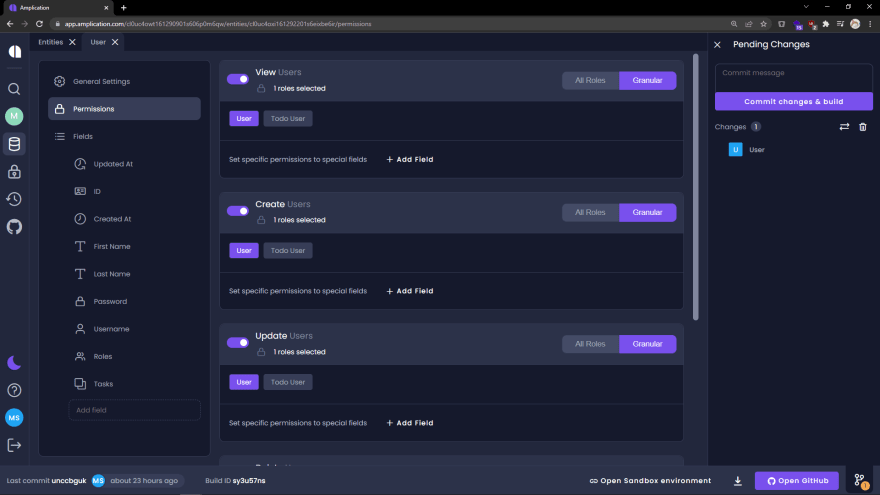 Return to the Entities page and now select the Task entity. Click Permissions. Toggle the Delete command, to Granular and enable access to the User role. Both Users (the admin) and Todo Users (regular users of the app) will be able to create, read, and update tasks; but only Users will be able to delete tasks. 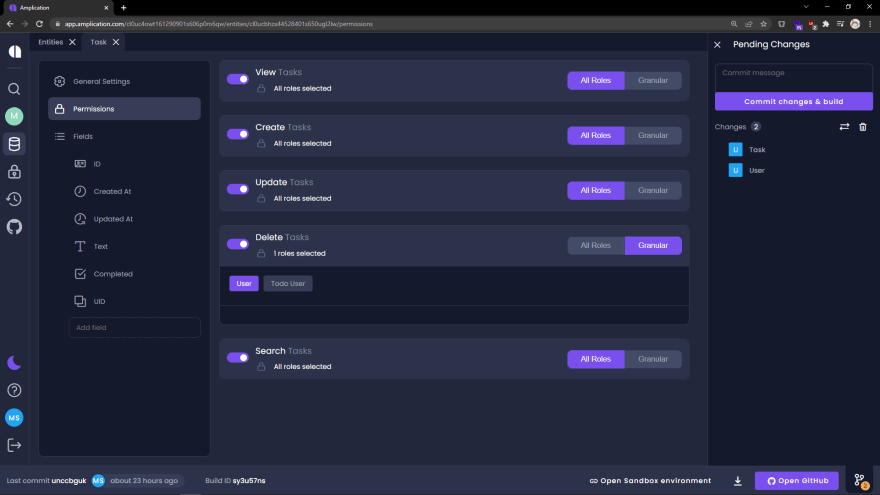 With the new Task entity created, and a relation with User's created. We're now ready to build the backend.

On the right-side panel is the Pending Changes where the changes to Task and User will appear. 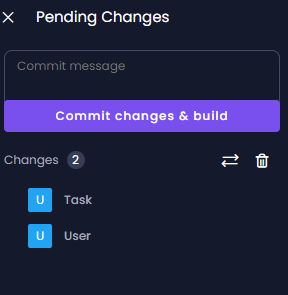 Click Commit changes & build to finalize the changes as well as to deploy an instance of the backend into a sandbox environment.

On the bottom of the page, there's a status button with the text Preparing sandbox environment.... Clicking that will route you to a log of the backend being dockerized and deployed. 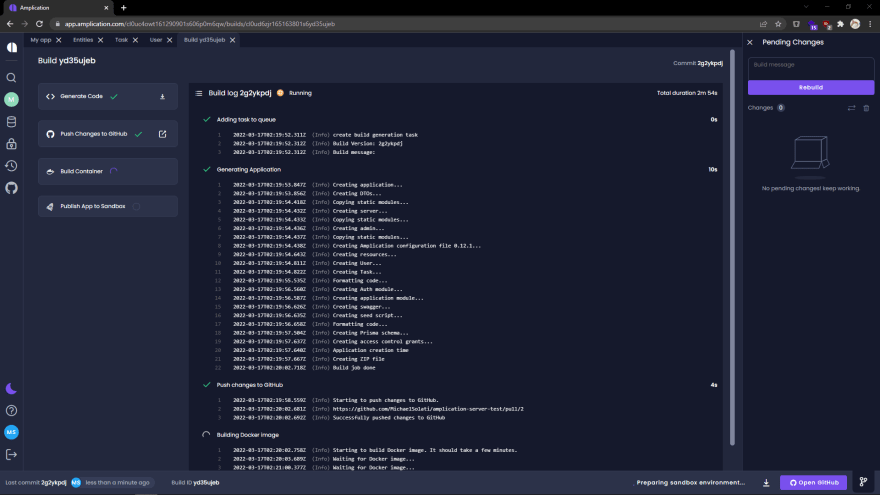 This takes a few minutes, but once complete you can see the backend by clicking the Open Sandbox environment, but we will not be using the sandbox for the Todo app.

Amplication by default creates a secure environment where all requests need to be authenticated. For this use case, we will want to ease some of those protections. Thanks to Amplication's extensibility, we can build on top of everything that was generated for us.

We'll start by downloading the backend. In the bottom right of the page, you'll see a download button. Click that and you'll download a .zip file containing all of the code to run the backend.

Extract the zip file and copy all of the contents (except for the README.md) to the root of the amplication-angular project.

The admin-ui and server folders generated by Amplication are two new node projects that need to be set up. One thing both will need is their dependencies. In the package.json update the postinstall script:

Open a new terminal and run this command

Install npm-run-all as a dev dependency as follows:

Update the start script in package.json and add the following script as well:

We've also set the start to script to run our frontend and backend code at the same time.

Before starting the server there are a few additional steps required. Read server/README.md for directions to:

When those steps have been completed run the following command:

With our backend created and running locally, we're almost ready to link it to the frontend. First, we'll need to make some additions to the code.

Check back next week for step three, or visit the Amplication docs site for the full guide now!

To view the changes for this step, visit here.

How to run Whisper on Google Colaboratory

Using Mason and bricks in your Flutter app: Beginner’s guide

How to Build a Cool GitHub Profile in 2 Minutes

Once suspended, amplication will not be able to comment or publish posts until their suspension is removed.

Once unsuspended, amplication will be able to comment and publish posts again.

Once unpublished, all posts by amplication will become hidden and only accessible to themselves.

If amplication is not suspended, they can still re-publish their posts from their dashboard.

Once unpublished, this post will become invisible to the public and only accessible to Michael Solati.

Thanks for keeping DEV Community 👩‍💻👨‍💻 safe. Here is what you can do to flag amplication:

Unflagging amplication will restore default visibility to their posts.