As a beginner, I've been learning Python on Udemy, but procrastination is always a problem. I find that I was often taking breaks on my phone to check a mobile game I play.

The game has a standard energy bar that most mobile games have, where players spend energy points to make moves. This game in particular gave the player +1 energy every 6 minutes. With what I learned so far, I thought to myself, what if I had a variable that held the energy number and then had it notify me when my bar is nearly full? That way I would have less of an excuse to check my mobile game.

I begin with the current_energy variable.

Then, I needed to add 1 energy every 6 minutes. In my search to figure out how to get what I wanted, I found the schedule and time modules. These were super useful and had the documentation I needed down to days, hours, and minutes. It also showed examples of how to define a job. I setup if/elif statements at 50, 60, and 70 for the current_energy.

I Googled how to make a custom MacOS notification. It involved using import os. I defined a new job for when the current_energy hit 70.

I repeated this and changed some words for 50 and 60 with energy50() and energy60(). Soon, I had a program that would ask me the current energy I had in game, then every 6 minutes it would add an energy point to the energy bar variable. I set it so that if it hit 50, it would notify me. Same for 60 and then 70, which meant it was full. I also had it set back to 70 again instead of going to 71, since that was the maximum in game.

I also had other ideas for notifications that I implemented as well:

An example of one notification was this: 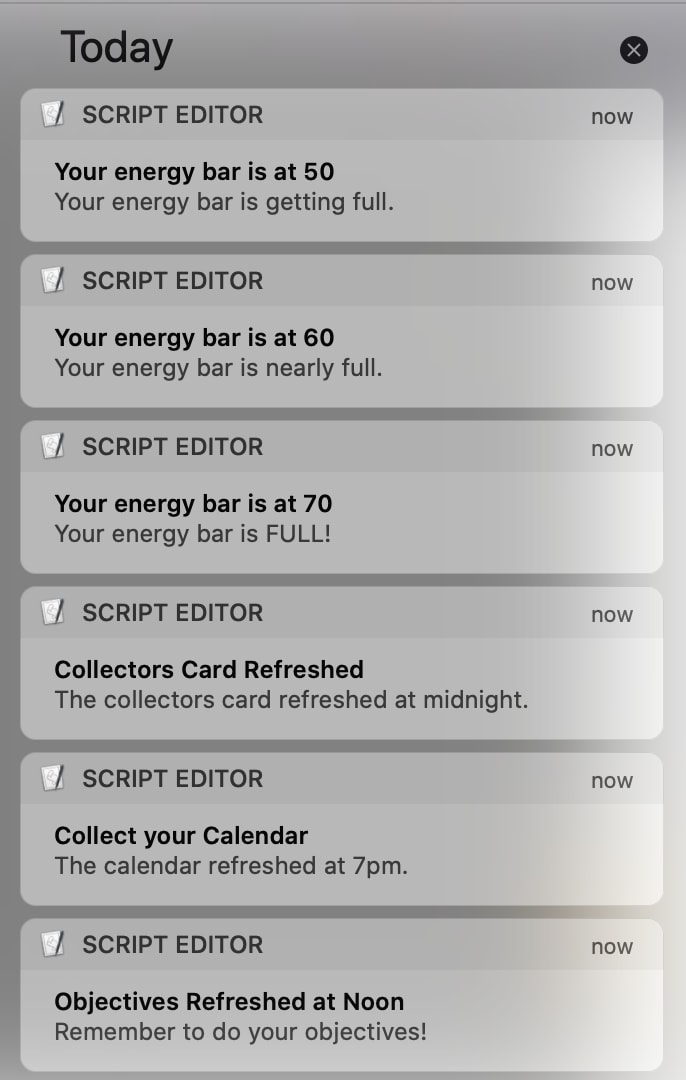 Finally, I used PyInstaller to wrap up my program as a simple executable to run in the terminal.

My code is on GitHub , for all you beginner Python students and mobile gamers out there.

Hopefully this will solve my issue with picking up the phone! Still, I'm pretty proud that I learned quite a bit about breaking down the goals and looking for what I needed with Python on this first project.

How to install Homebrew, Pyenv, Pipenv in WSL (Windows) Ubuntu 20.04

Why programming languages are slow