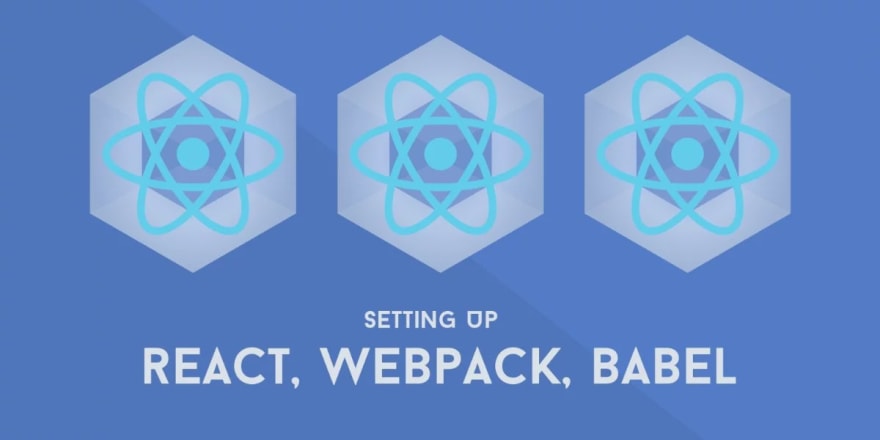 Webpack is currently one of the hottest tools out there. It is quite difficult to understand in the beginning but I'd say Webpack is a really beneficial tool that optimizes your Web application. Let's first understand the basics.

As our application grows, we split it into multiple files, known as modules. Webpack is a module bundler for all our assets. In simple words, webpack processes all the modules and generates a single file known as bundle and give it to the browser that it will understand.

In this article, we're going to set up our React application using Webpack and Babel. So let's get started.

npm init-y will generate a package.json file in your root folder of react-webpack-setup with all the information.

It will also generate a Node_Modules folder which contains npm libraries such as react, react-dom (which we're going to use) that our project needs. You shouldn't push it to Github, instead create a .gitignore file and push inside it. Whosoever clones your repo will be able to download it themselves based on your package.json

Now, we're going to create an src folder where we'll have our index.js and index.css files.

We're also going to install react and react-dom from npm.

index.js would look something like this. Here we have a simple App component.

Interestingly, index.js is a module that contains some modern things like JSX and arrow functions. That's where Babel comes in. We'll discuss that later.

Next up, we're going to install some dependencies.

Webpack takes all our modules (we only have a single index.js module here), and create a single bundled file that we can later reference in our index.html file.

Now, in order to configure webpack, we need to create a webpack.config.js file in our root folder.

We're telling webpack the entry point of our application i.e., index.js. Mode can be set to development or production.
Source-maps are cool in case of debugging. Source map keeps the transformed code and the original code in sync so that when debugging, the developer has the option to look into the original code instead of the complex bundled code.
Finally, we're telling webpack to emit the bundle in the dist folder.

Next, there's a module with a set of rules defined. It simply says whenever a js/jsx module is encountered, hand it over to the babel-loader. Babel-loader simply converts/transpiles the ES6 code to the code that the browser can understand.

The css-loader interprets @import and url() like import/require() and will resolve them. Style loader takes the css and insert into the page.

HtmlWebpackPlugin generates an index.html automatically which includes a reference to the bundle.js file. We can also create an index.html file. Webpack uses index.html as a template. It would look something like this.

We're mounting our React app here .We're not using script tag here, because HtmlWebpackPlugin will create a dist folder with index.html and add a script tag automatically referencing bundle.js. Basically, we're creating a template for the generated HTML file, not the actual file.
HtmlWebpackPlugin will copy that template, and add your changes on top of it in the index.html that it spits out.

We know that Babel transpiles code that the browser can understand. It uses various plugins like @babel/plugin-transform-arrow-functions' which transpiles ES6 arrow functions. Babel has moved one step ahead by creating presets. Presets contain various in-built plugins so that we don't have to use separate plugins for every other transformation. How cool!

@babel/preset-env transpiles ES6 syntax to ES5 or whatever the browser can understand whereas @babel/preset-react handles the conversion of JSX modules into the simpler form.

Now, we've set up everything, it's time to start the server, and to do that, we're going to add a script in our package.json file.

After you type npm start, you'll see Hello World on the screen. Also, you'll get a brand new dist folder with index.html and bundle.js file.

Hi there! I have started to get into this DEV community and so far enjoying a lot. I'm a full-stack developer and like to write on React and JavaScript.

How to become JavaScript Ninja?

This is why you should go Angular 9 today

Akhil Dhiman
@akhildhiman
Hi there! I have started to get into this DEV community and so far enjoying a lot. I'm a full-stack developer and like to write on React and JavaScript.
work
Full-Stack Developer
location
Dharamshala, Himachal Pradesh, India
work_status
I'm looking for work!
education
SRM University
joined
Dec 19, 2019