One member of the ever-growing stack of old laptops is my wife's old Macbook Pro (Mid 2010). Years ago I installed the maximum allowable RAM of 8 GB as well as a 250 GB SSD instead of the HDD it originally came with. It has the well-known issue of crashing whenever the discrete NVidia graphics are being used.

A long time ago I started running Linux on it, as it feels much faster than the latest version of MacOS that would run on it, and there's an easy fix to disable discrete graphics and use the Intel chipset's graphics card instead IF your flavour of Linux uses the grub bootloader.

So a couple of days ago I installed Manjaro (Gnome) on it and had to remember how to disable the discrete graphics adapter yet again.

2. Find the line containing the following

These have to be inserted after set gfxmode=${GRUB_GFXMODE}

Comments for what the individual calls to outb do are taken from here.

This will write your changes to Grub's boot config and will run the commands from above next time you boot. 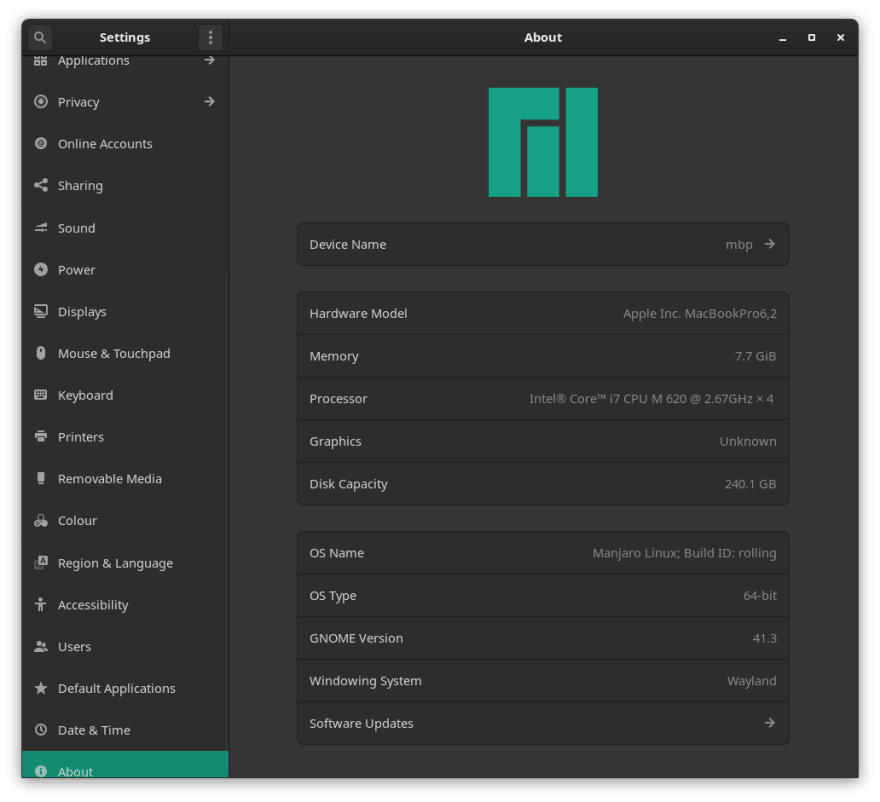 Side note: Before applying the above fix, Gnome would think there were two internal screens, which you can work around by going into the display settings and enabling mirror mode.

I think this also disables the use of external displays, but I have never tested that assumption, as I would use the Macbook Pro as a web browsing device.

Once suspended, __tsak__ will not be able to comment or publish posts until their suspension is removed.

Once unsuspended, __tsak__ will be able to comment and publish posts again.

Once unpublished, all posts by __tsak__ will become hidden and only accessible to themselves.

If __tsak__ is not suspended, they can still re-publish their posts from their dashboard.

Once unpublished, this post will become invisible to the public and only accessible to tsak.

Thanks for keeping DEV Community 👩‍💻👨‍💻 safe. Here is what you can do to flag __tsak__:

Unflagging __tsak__ will restore default visibility to their posts.