I’ve already spoken a bit about our efforts to grow a platform and a community around our early-stage company and because we know that it works we’ve been at it since Day #1 (and we obviously encourage you to do the same!).

Our motivation was simple and we decided, among many other reasons, to take and heed the advice of David Bailey (whom I’ve already quoted before):

Someone needs to be doing marketing activities at your startup from day 1. Not after launch. Not during some PR campaign. Every day. Building a great product is hard. Great marketing is hard too. And you absolutely need both in order to win.

Although we can all mentally agree with David and may even find ourselves nodding our heads ever-so slightly, execution is really hard.

Yes, we all want to be like pollen when it comes to our startup but it’s hard when you have so many other things to do during the day, especially when it comes to building a product that people want and love.

And the pressure (and competition) continues to mount! A recent article that came into my feed yesterday was via Tomasz Tunguz, a VC @ Redpoint who’s articles have always found a lot of favor with our team because his posts are both strategic and data-driven instead of being highfalutin and heavy with “startup-speak”.

The result? Well, with these things in place you have a real opportunity to reduce the cost of customer acquisition and also the chance to reduce potential for churn and loss of revenue.

All of this makes complete sense but it can still seem a bit daunting for even the more experienced early-stage company. What should a startup do? What can they do when they have limited resources to pull the trigger? 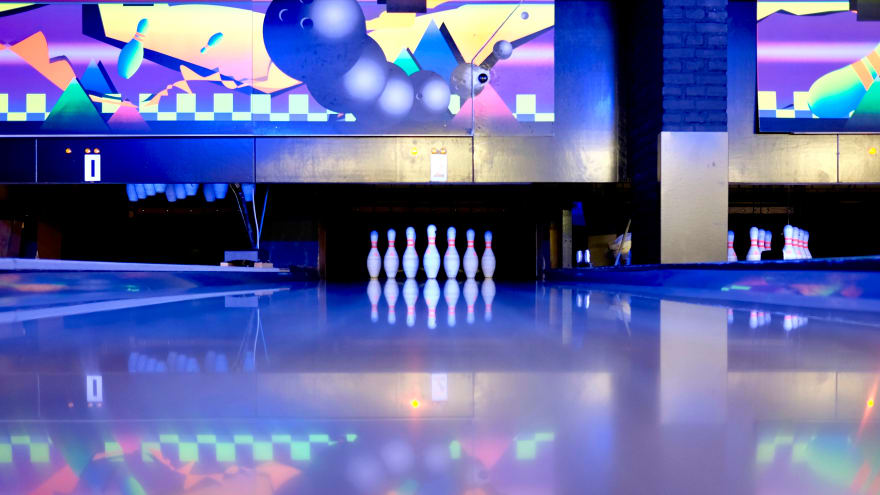 They can first keep things super-simple. And when I mean “simple I really mean simple. There are a ton of much broader and more comprehensive Playbooks out there – just Google for it and you’ll find some really, really good ones.

But most of those are far too complex for anyone’s real use, especially as an early-stage startup and even more impossible if you’re building a small indie project for yourself. Remember, you can always make things more complex (that’s easy) but it’s always more difficult to make complex things simple!

And so here’s a simple and small alternative playbook for you to review. My hope is that it can be much more useful and can set an appropriate expectation for what it could become and where you could take it.

Let’s first start with the basics, which Tomasz nicely links as well: The Buyer’s Journey, which is a 3-stage process:

What I love about this breakdown is that it’s clear and concise and it’s simple to execute against. What’s also brilliant is that for an early-stage startup or in the initial stages of a project all you really care about is the first one: Awareness.

This means that all your efforts will essentially circle around the first part of the process. You can, of course, hope that folks who encounter your content marketing work will move toward the Decisions Stage but you’re probably not even close to that point, let alone the fact that you probably don’t even have a product available to purchase!

With that in mind, the singular goal of your content marketing efforts will be awareness. You can worry about the rest of the stages when you’re there. 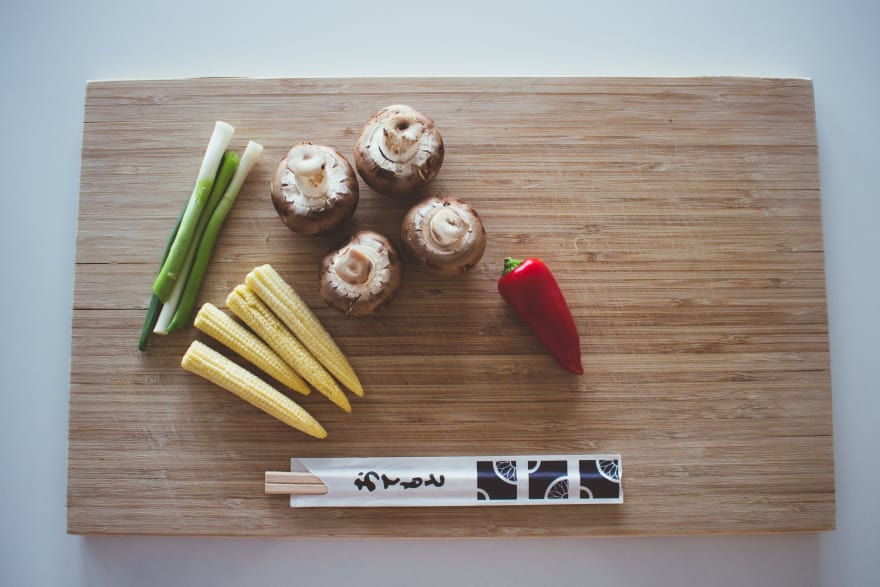 The ingredients to this playbook, therefore, are simple and also straightforward:

That’s it. That’s the playbook. Simple, right? You start with mental assent, you make a decision around one tool or technology, you spend a few moments adding a repeating event in your calendar and then you execute against it.

Want an example? Sure, why not – in fact, I’ll give you the exact content marketing attack plan that I had for a small indie project that I built last year.

So, let’s start with some context and go from there: I was building a small image editing macOS app and I wanted people to know about it. But, it was a complete side-project and I had only a small amount of extra time to put to it as a whole.

Consequently, my time was desperately limited and I needed to put serious investment in both product and engineering and building awareness for the app to eventually convert (I was selling in the Mac App Store).

I made a commitment to blog at once a week. The topics didn’t matter as much as the fact that I was sharing something about what I was doing. This eventually produced blog posts about the design (UI/UX), product and engineering considerations, and even random screenshots of things that were inspiring me.

So, I put a reminder in my calendar and it looked exactly like this: 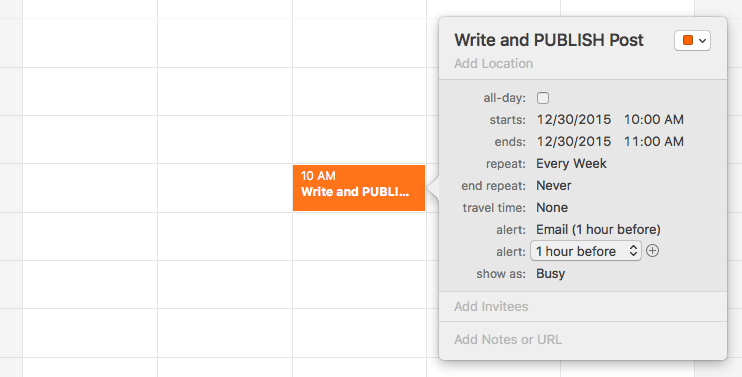 I made my commitment simple and I choose one tool/technology: One blog post a week. I would commit an hour to it from end-to-end and I would publish something.

I can remember that there were more than a few times where the time would creep up around 10:00am and I would inwardly groan, knowing that I had a million other things that I felt might be more pressing but I knew that to ultimately get to place where people would buy this small app that I needed to execute consistently against the first part of the Buyer’s Journey: Awareness.

And, to do this, I needed to make good of my commitment. I would sit, starting at 10:00am and I wouldn’t get up until something was published an hour later. Then, if I remembered, I would go one more step and share this post publicly into my personal Twitter. But that’s it.

Nothing to it, right?

Well, I’ve counseled and coached many early-stage companies and I know the struggle (it’s real). The biggest challenge that most folks encounter when they start thinking about content marketing is they feel pressure to have that super-comprehensive strategic plan with ridiculous amounts of digital air cover.

The intent and motive is good and I understand that they want to present the very best picture of themselves and their project. I get it, I really do! But 9 out of 10 times this good intent gets in the way of what really matters: Execution.

Instead of being able to execute against a simple calendar of creating awareness their expectations are set way too high and they become discouraged.

Consequently, this discouragement piles on week after week until they realize they haven’t done anything to promote awareness of their project and new startup. A week becomes two weeks which becomes a month which becomes a year.

And then they’re ready to launch (and they do) and their very first (and only) blog post is their “Hello World announcement post, essentially, about their “v1.0 Launch!“. I mean, let’s be honest for a moment – how many times have you seen this exact thing happen?

At that point, it’s too late and they’ve lost months (if not years!) of time to create awareness, build a community around the product, and have earned the right to convert some of them into buying customers. Sadly, they then become confused and even more disheartened when only a few folks show up and they can’t seem to convert.

Obviously, that’s not the story that you want for your project or early-stage company. You want the exact opposite. You want hundreds (if not thousands) of folks lined up to buy your product when it first shows up on digital shelves and even more folks cheering you on! Imagine how that would feel and how different the outcomes might be!

But to do that you have to execute against the Simple Content Marketing Playbook, commit to building the awareness through one channel, calendar it in, and then execute (and don’t quit).

I feel like I’m beating a “dead horse here, but don’t be fooled: You’ll be grossly tempted to add more complexity to this simple content marketing playbook because of the many “best practice strategies that you’ve read before or collected but remember that execution > strategy 100% of the time and if you out-strategize your ability to execute then you’ve got it entirely backward.

Too Easy? Okay… Bonus Material for the Brave…

Okay, so you’ve done all that. Great. You’re already a million light years ahead of your competition because most folks won’t even get through the strategy-building part of putting together a content marketing playbook let-alone execute against it!

But you want a bit more. Sweet. I’ve got a bit of that for you too and the system is just as simple as the foundation. To expand on the fundamentals all you have to do is the following:

So, if you’re blogging then perhaps add Twitter to the mix. Or, if you’ve just started with Twitter then perhaps add a blog. Or perhaps create a LinkedIn page for your business or Google+ or Facebook. To a certain degree it almost doesn’t matter. Just incrementally add one.

Or perhaps you’re good with your single channel but you feel like instead of every other week you’re now going to publish one time a week. Great. 4 blog posts a month instead of 2? You can do it!

So choose to either increase by one channel or increase the amount of times you hit “Publish”. That’s it. And, as you naturally guessed, you can continue this steady and incremental growth strategy infinitely as you get more comfortable, automate your systems, and even hire staff.

Again, this adds more complexity so make sure you’ve really locked in to a workflow that works for you and your team and that you do it wisely.

If you’d like a few ideas then here are a few of the content marketing channels that I added after just blogging on this blog for 6 months (without adding complexity). Sure, I didn’t start with just one channel to begin with, but, that’s because I’ve done this a few times and I’ve automated a bunch of things.

In fact, most aren’t (although a few of you would like to think you are…). It’s a skill that takes time to develop and you need to work on it, just like anything else. You don’t have to become a master or anything close to expert-level status, but, you do have to try.

And, what’s nice is that you don’t have to have the Jedi skills for real impact to be sown from even the smallest amount of content marketing efforts!

There are 1,000 things that are threatening to kill your startup… my hope is that your lack of content marketing won’t be one of them and that you’ll make the time to put together the first building-block of the Buyer’s Journey, awareness, and then be wildly successful!

Hit me up if you have any further questions or even want me to review what you’ve put together! And if you’d like to hear me rant on a vlog a bit about this, I’ve got you covered. Bottom-line is this: I’d love to help! So ping me.

What developers do in free time?

A short history of the Stripe Status Page