Sometime in 2016 I decided to create a LinkedIn account to bring me more career opportunities. I signed up, sent email invitations to all of my contacts, and began filling out all the necessary info. I can literally brag about my achievements on the internet and not be called a narcissist, I thought to myself, wonderful! In a matter of a few weeks I was connecting with people left and right, and making some strong, possible leads. It was going better than expected! So well, in fact, I decided to tell my wife she should create one too.

I sat next to her as I watched her sign up. She filled in her name, her email address, industry and current occupation. The next page held within its pixels one of my first known run ins with... Dark Patterns. It was a list of every single person she has ever sent or received an email from who already had a LinkedIn account. "Connect with your contacts," the page said. Now, when I say "every single", I mean every single contact since she made her email account in 2004 at the age of 13. The list was long, so long. "Ugh, I'll do this part later," she insisted. She clicked a grayed-out "Continue" button that – in all of my years using the internet, told me that it shouldn't be clickable – actually did something. "Are you sure?" a pop-up inquired. Again, she clicked another grayed-out button that closed the window and went to the next screen.

The next page held within its pixels one of my very second known run ins with... okay, you get it. This time it was a list of contacts that didn't have accounts with LinkedIn. "Invite your contacts to LinkedIn," the page said in big letters above. The emphasis on the length of the list in the previous page paled in comparison to this page. It was monumental. Again, every contact she has either emailed or received an email from, and didn't have a LinkedIn account, was on this page. The list was long, so-so long. "I'm going to skip this too," she said obviously. She clicked the grayed-out button and, you may not have guessed it this time, did absolutely nothing. "I don't want to do this now," she said again.

I grabbed the mouse from her and this is where my entire day went from good to bad.

I clicked everything that seemed like the proper way to continue moving forward. Click click click. Nothing was doing anything except the checking and unchecking of the boxes to invite people to join LinkedIn.

In a moment of confusion, I clicked "Select All" and there it went. My good day flew out the window along with hundreds of email invitations sent to her friends, coworkers, acquaintances, ex-friends and ex-boyfriends, her old modeling agent who screwed her over on thousands of dollars, her biological dad who kicked her out of the house when she was 16 and haven't spoken to since. You know, the exact wrong fucking people to receive this email that will show everyone what she's been up to professionally for the past few years.

But was it really my fault? Sure, I did the clicking but it wasn't what I wanted it to do. In every occasion of the sign up process a pop-up would appear asking us if we were sure we wanted to do this. LinkedIn only asked when we did something it didn't want us to do. But the one time I click on something it liked, "Select All" in this instance, it had no problem second guessing me and went ahead and sent out all of those emails without giving me a chance to confirm. It felt like it was guiding me to do something I didn't want to do. This, and the grayed-out buttons, are a good example of Dark Patterns.

Dark Patterns, coined by Harry Brignull on July 28, 2010 after creating darkpatterns.org, is an interface design intentionally made to deceive users into doing something they might not want to do while also benefiting the business in question. This includes making something unclear or difficult to access such as closing an account or canceling a subscription. Some websites (we're all looking at you, Facebook) go as far as to use your friends to guilt you into canceling your account! 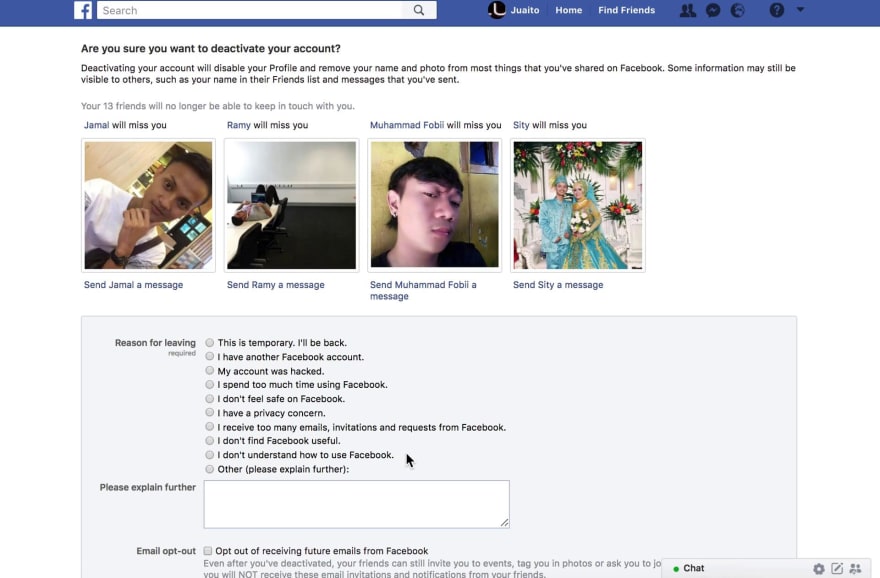 In this video about Dark Patterns, Nerdwriter1 shows that every place you think you would go to close your Amazon account, doesn't actually get you to a "close your account" option. Instead, tucked behind many pages, a dropdown appears but only shows very general issues. After selecting "Login and Security" a second dropdown appears where you can close your account. Finally? Nope. You have to join a chat with an Amazon representative where they'll list off every reason deleting your account is a bad idea. Once you get past all of that, they have to go in and manually delete your account for you. This is called a Roach Motel – a design that makes it easy for you to get into something but difficult or impossible to get out.

Here's a list taken from darkpattern.org on the different kinds you may run into:

Trick Questions
While filling in a form you respond to a question that tricks you into giving an answer you didn't intend. When glanced upon quickly the question appears to ask one thing, but when read carefully it asks another thing entirely.

Sneak into Basket
You attempt to purchase something, but somewhere in the purchasing journey the site sneaks an additional item into your basket, often through the use of an opt-out radio button or checkbox on a prior page.

Privacy Zuckering
You are tricked into publicly sharing more information about yourself than you really intended to. Named after Facebook CEO Mark Zuckerberg.

Price Comparison Prevention
The retailer makes it hard for you to compare the price of an item with another item, so you cannot make an informed decision.

Misdirection
The design purposefully focuses your attention on one thing in order to distract you attention from another.

Hidden Costs
You get to the last step of the checkout process, only to discover some unexpected charges have appeared, e.g. delivery charges, tax, etc.

Bait and Switch
You set out to do one thing, but a different, undesirable thing happens instead.

Confirmshaming
The act of guilting the user into opting into something. The option to decline is worded in such a way as to shame the user into compliance.

Disguised Ads
Adverts that are disguised as other kinds of content or navigation, in order to get you to click on them.

Forced Continuity
When your free trial with a service comes to an end and your credit card silently starts getting charged without any warning. In some cases this is made even worse by making it difficult to cancel the membership.

Friend Spam
The product asks for your email or social media permissions under the pretence it will be used for a desirable outcome (e.g. finding friends), but then spams all your contacts in a message that claims to be from you.

We've grown so accustomed to Dark Patterns that we see them every day and don't think twice about it. Having to sign into your account to unsubscribe, replacing cancel links with "remind me later" links, and going against common sense design – like graying-out buttons to prevent a user from doing something the website doesn't want them to do – are common Dark Patterns intentionally designed to mislead you into doing something against your intent or consent. As web developers we should pay attention to these bad designs by putting the user before the business.

I was in hot water for the rest of the day after my LinkedIn mishap. Apparently, LinkedIn has been riddled with Dark Patterns throughout the years along with many popular websites you visit. It turns out something good actually came from it, though. My wife's father actually reached out to her a few weeks later to reconnect and they're going to get dinner tomorrow! All that being mad at me was for nothing :)

The 4 stages of Design Process